Routes in The Monument Base Area

Abraxas is one of those routes that people would love to have climbed, but maybe not enough to actually climb it. Talk to anyone who frequents Smith and enjoys multipitch climbing and they'll tell you that they want to do it someday.

Honestly, it's really not that bad. This route's reputation for being runout is entirely untrue and it's reputation for being choss is only a little bit true. While there are certainly creaky, flaky holds, it's well protected and most(!) of the hard climbing is on excellent stone. That being said, many of the belays are directly in the leader's line of fire, so bring a helmet.

P1: 5.6-10a Climb any of the excellent sport routes of the Monument Base Area to the rightmost anchor.

P2: 5.9 Step right and then up to gain an obvious left-facing corner. The flakes in the corner sound hollow, but you're clipping shiny bolts. Hand traverse left (good gear) to two separate anchors. Of the two, we used the left one, but I'd recommend the right. (it's just a touch further out from under the line of fire and is in better rock) Pitches 1 and 2 are easily linked.

P3: "5.11-" (to quote the Watts guide) I’d peg it more around 11+. This is where things start getting interesting. Work up and left to a distinct crux at an asca bolt out left.  Execute a thin, off-balance sequence on sidepulls and edges to a rail up and left and then work back right to another asca bolt higher up.  If you clip either of the two bolts to the right, (before the aforementioned 2nd asca bolt, more in line with the original bolt ladder) make sure to use long slings.  Once established in the chimney, wade through some easy choss until just below an old, manky anchor.  From here either continue left up the original line of terrible old bolts in choss (not recommended, 9+/10-) or step right to ledge with a less old anchor., but don't stop and belay.  Instead climb up much better rock just left of a blunt arete clipping more new asca bolts before running it out on easy ground to the top.  (recommended, 10-)

P4 5.12- Moderate climbing up less than perfect rock past more ancient bolts (easily backed up with gear and newer bolts) spits you off at a nice stance below a steep swath of vastly better rock. Gymnastic and balancy moves on some booming flakes deposit you at the crux. After pulling through the difficulties onto the ledge, catch your breath (don't belay) and climb further up and right clipping shiny new bolts as you pull exciting moves in one of Smith's more airy positions. Belay at either of the anchors at the base of the Tombstone crack. (can't miss it)

P5: 5.10+ Pull a thin face move to gain the start of the splitter. It starts as fingers and gradually widens up to hands. Power through the fingers/off-fingers down low and savor the amazing (but kind of sharp) jamming above. Belay at a large, obvious ledge.

P6: 5.6 Climb up and left following an obvious weakness that will ultimately corkscrew up to the summit. Watch out for rope drag.

Descent: The whole route rappels easily. Anchors are down and east of the summit. We used two ropes, but there are rumors of a single 70 being sufficient. I bet you could make this work (certainly with trickery) but can't be sure, not having actually done it. Alternatively, scramble and walk back (north) to the grass and descend the large gully to the west between the Monument and Puddy's Tower. (don't start descending until you're all the way back to the main hillside).  Walking off is well worth the hassle of carrying shoes and goes very very quickly.

Single rack to #3, optional #4, I found a red link cam to be a semi-crucial piece to best protect the crux sequence. all the cams you care to bring for the Tombstone Crack, (described elsewhere on this site)
Many (10+) draws including extendables. You don't need wires. Blasphemy, I know. 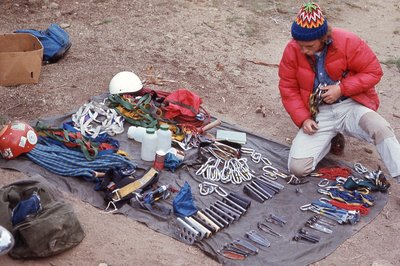 Wayne Arrington racking up for an early ascent… 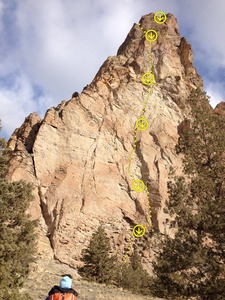 The Monument. Lots of sun. 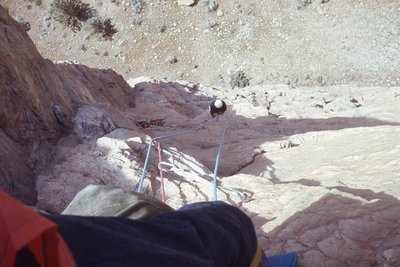 Aid with a little bit of free, back in the day.… 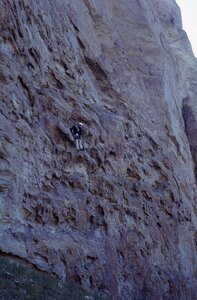 Wayne Arrington starting up the first pitch on… 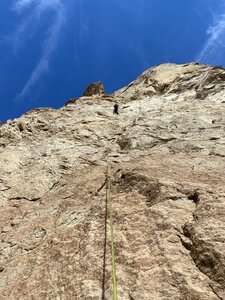 Hans reconsidering his beta after whipping off… 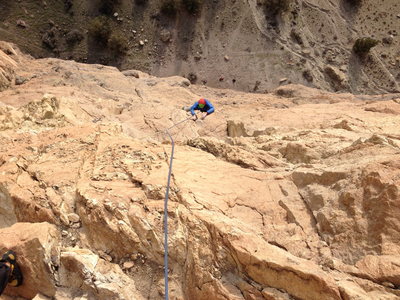