Section B is the unfinished middle part of the Telluride Traverse and covers the skyline north of Telluride from Mount Emma west to 'TO' Peak.

Start on Mount Emma (13,581'), and traverse north to Gilpin Peak (13,694') over Fourth and low Fifth Class terrain around several towers on the ridge. The large cliffbands can be passed to the west with some exposed and unprotectable fourth class.

The traverse to 'Block Top' (13,543') to the west is very challenging. This is as far as Section B has been taken. There are rapell anchors on ths first tower encountered. Block Top gets serious, as does Dallas (13,809'). These are the cruxes of the whole traverse. There is a huge notch in the ridge between Dallas and West Dallas (13,741') that will present another crux. From Gilpin west to this notch is very, very challenging and presents the unknown ground. From the notch to 'TO' (13,735') is third class. 'TO' is the mountain north of Campbell Peak and the second highest peak in the traverse behind Dallas.

Mount Emma can be climbed a number of different ways from Telluride. The West ridge can be climbed from Sneffels Highline Trail at Fourth Class, or the South Face, or Southwest ridge (from Greenback Mountain, come in from the south to the summit of Greenback - its West Ridge don't go). You can also hike up Tomboy Road; turn uphill at the Bullion Tunnel and hike the ridge over Little Mendota and Mendota Peak and cross St. Sophia Ridge. St. Sophia can be bypassed to the East any number of places along the traverse.

The difficulty and requirements of climbing Dallas Peak are known and dictate what you need to carry - a thin rope and small alpine rock rack at a minimum, likely. This complicates logistics considerably, as carrying this gear would slow the pace to a point of negating completion. The traverse from the east summit of Dallas to the west summit of Dallas, however....

It would be best if it were possible to get to and across the tops of Block Tops and Dallas Peak without a rope and the giant notch following. OR an alpinist's strength will do, and you belay adventure-5th Class from Block Tops multiple walls and rappels all the way through the many technical stretches over to West Dallas.

The vertical rock up very high is much more solid than most of the San Juan rock, and solid rock pro can be abundant. 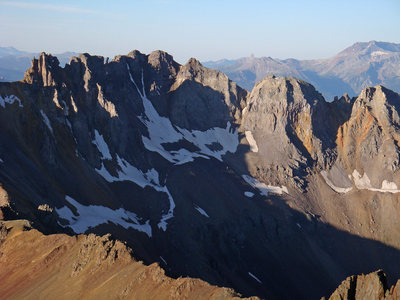 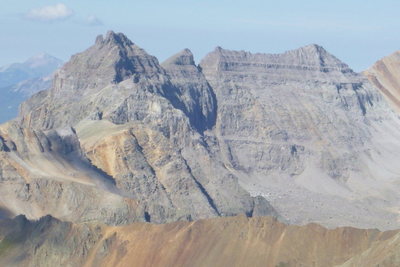 A view of the north faces of Dallas (left) and… 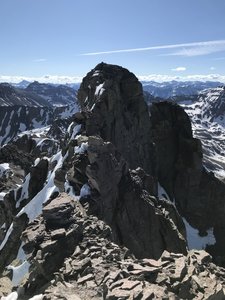 The spicy West Ridge of Dallas. There's some gr… 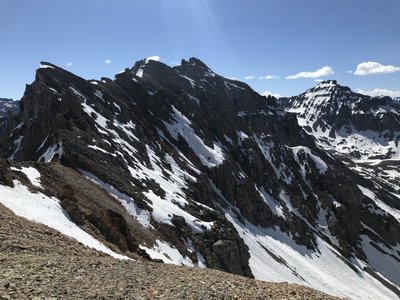 Looking southeast across the Block Tops, with E… 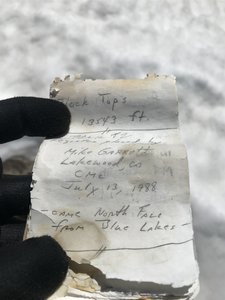 The register on top of Block Top's highest summ… 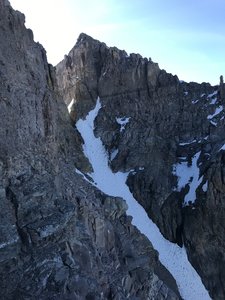 The infamous Dallas Notch. It's worth noting th… 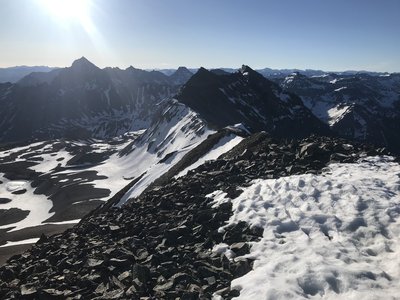 Looking east from the summit of T-Zero. You can… 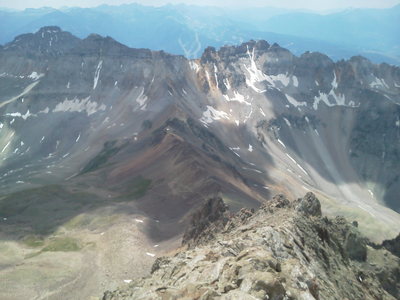 From Sneffels looking south towards Gilpin and… 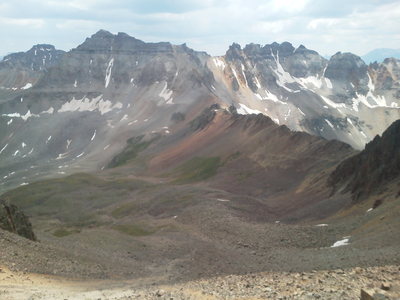 View from Mount Sneffels looking south at the t…

More About Emma to T.Zero