Three Tiers is most well know for its fat and consistent lower half. After glassing the route's upper pitches, we headed out for a moonlit solo to the end of the ice, 1,500'+ above 10 Mile Creek. The line goes at WI3+/4-R with some potential M4/5.6 climbing. Protection can be sparse in places due to poor features for gear, although where you find solid rock, there are excellent holds. There was another group that had climbed this a day or so before, which set some new rap stations mixed in with the old.

This is an excellent outing that one could possibly call the "Polar Circus" of 10 Mile Canyon. The mid-route crux can be delaminated or non-existent and is reached by walking right up a gully that bypasses an overhanging 60' face that rarely if ever forms ice. We face climbed 70' of face and stepped right on thin, delaminated ice in the upper crux to continue to the tiers above. It also appears that one could skirt the entire 30m crux with 5.6 R rock climbing to climber's left on a loose, broken gully/ledge system. The old bolt anchor could use replacement as only one flattened hanger remains. We simul-rapped the upper half and downclimbed the lower half for a 4 hour round-trip adventure in the backyard.

As mentioned for Three Tiers, this is a massive terrain trap. It is a great fall alpine route before enough snow falls to create deadly avalanche potential. Up high, we experienced 2' of wind-blown in the gully with 3" windslab. It is not a place to be with any significant snowfall.

UPDATE, 1/2018: with a consistent freeze/thaw cycle, the upper most part of this gully was soloed to the summit ridge near Peak 3. Stanley Vrba climbed past my highpoint through an arduous and dangerous steep snow slog to tackle 2 more delicate ice pitches (thin AI 3/4) and 2 more sketch drytool/rock headwalls around some spectacular towers. He reported waist/chest deep snow in the gully above Upper Tiers and a lack of anchors for any possible retreat. The alpine ice encountered was variable and thin. Rock sections are the usual suspect quality. With a full 3,000’ ascent, descent requires a tedious and super exposed traverse along the ‘Dragons Spine’ between Peak 3 and 2 to Peak 1 and down the Mt. Royal trail to Frisco. This is dangerous and demanding (Grade III, AI4-R/X, M5/6-R/X). Unlike ‘Polar Circus’, rapping the route is extremely difficult above the Upper Tiers. This is probably one of the best alpine routes in Colorado, with a super short approach to a long day and all the physical/mental demands of similar routes in remote ranges.

The rock in 10 Mile Canyon is typically slabby and devoid of many gear placements. That said, there are times when you can get a cam or pin in spotty places. Trees usually afford the 'best' pro. We soloed, but I could maybe see a set of link cams and a few thin pins (KBs, LAs) and a single 60m rope. There may be a way to walk off on climber's left through the trees, but it would be a tedious hassle indeed unless you wish to drop into Round the Corner. 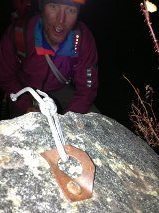 Eric expressing his rap concerns as he tensions… 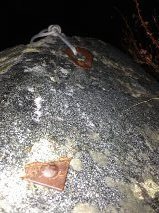 The sheared-off 2nd bolt on the mid-route rap,…