Routes in (a) Picnic Lunch Wall

Five Easy Pieces is a worthwhile adventure on mostly good rock. With four pitches at 5.12 or harder, it's no gimme, but is generally well protected and is characterized by excellent moves on mostly impeccable rock. It's worth noting that this route has a lot of drilled holds, (like many routes at Smith) but is super fun to climb anyway.

Pitch 1: 13 bolts. Climb the heavily chalked and popular sport pitch. Instead of stopping where the chalk ends, climb past anchor onto a friable slab and take it to a different anchor at a great ledge. 5.12a

Pitch 3: Watts says 9 bolts. We found more. 10? It's easy to back clean higher and you'd be psyched to have some long runners on many of the bolts. Climb directly up off the belay and get established underneath a small overhang. A crux move getting over the bulge spits you out on a thin slab on beautiful rock. Traverse left into the obvious weakness. (scary for the follower) Just as the moves ease, the rock turns to total crap for 10' until you get established in the (bolted) hand crack which has surprisingly good rock. Follow this to an anchor. (Marginal. 5 historical 1/4 inch bolts) 5.12a

Pitch 4: 4 bolts. A short pitch. Watts says it's not any good, but despite a little choss at the start, it's good rock and fun to climb. Follow the bolts up and left to a large ledge. 5.10

Pitch 5: 7 bolts. If this were on the ground, it would get lapped constantly. There's nothing else at Smith like it. Steep, bouldery moves off the ledge lead to a thin crux moving through obviously drilled pockets. As the holds improve, the angle kicks even further back for a couple more bolts of steep, athletic movement and wild positions. 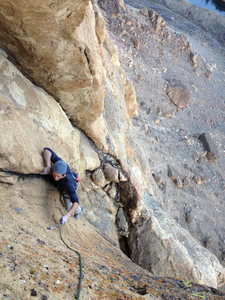 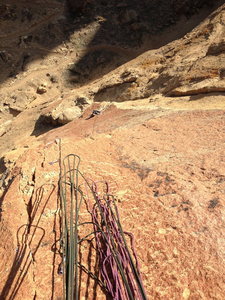