The West Ridge Direct route is a very rarely climbed variation on the West Ridge route. Basically it simply follows Little Bear's prominent west ridgeline all the way to the summit. I climbed after doing the standard (Hourglass) route, and one of the guys with me had previously done the Northwest Face. The consensus was that this route is much more difficult and exposed than either of those. The ridgeline varies in width from about 4' at the widest sections, down to less than 1' at the narrowest.

The exposure is extreme, the climbing is scary, and the rock is not so great, but overall it is an incredibly fun route. We free-soloed this in a party of 6, I wouldn't recommend bringing a rope or rack as the extra gear would more get in the way than help. A helmet is a must.

Gain the West Ridge proper as described for the West Ridge (Hourglass) route. After passing the last large notch in the ridgline, climb to the ridge proper, instead of traversing south to the Hourglass gully. Once on the west ridge proper, stay on the top of the ridge for nearly the entire climb, negotiating the towers and headwalls as they come.

There are two "crux" sections on this route, a roughly 5.4 chimney with a large chockstone at the top, followed shortly by a 5.2 slab with some old webbing near the top.

Near the summit we turned south towards some cairns that mark the upper portion of the hourglass route, however, I think you can stay on the ridge all of the way to the summit. 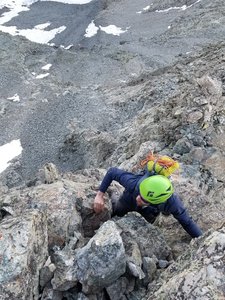