Routes in The Royal Tower

Probably the most popular route on the Royal Tower. Thanks to a striking line, mostly moderate climbing, and, most importantly, inclusion in Puryear's book, makes it easy to understand why. As noted, I would imagine the majority of parties stop at the top of the rock, but continuing to the summit makes for a really rewarding route. This, of course, requires carrying boots and tools all the way up there. At any rate, a very worthwhile route with very fun climbing in spots and amazing views. Easy to bail from any point.

Our first pitch, in late July, involved 30ft. of mixed climbing out of the moat and up a big snow "blob" to gain the rock proper. Be careful, either I just thought it up or I read of someone that witnessed this collapse. A most frightening image. The second pitch holds the routes crux (minus the blob) and is pretty dang cool face climbing over a little roof. Really short, well protected 5.10a. This is followed by an excellent, long 5.8 corner.

From here, we had a tough time following the topo, but had an ok time following our noses and rap anchors (plenty of them). There's a lot of 4th class. The 5th pitch (per the topo) is pretty obvious and goes out left from a piton belay that can actually be easy to miss. It is some really good climbing although a tad scary depending on how you do it.

A couple more pitches up there is a huge ledge with a snow patch on it. There were some slings in the right facing corner off this ledge, but we climbed up a ramp to access a full pitch of amazing, chicken headed face climbing to the right of the corner. From here, the buttress is a little more defined. Stay to the right of the arete for the most part, but we didn't really know where we were going. Just be on the look out for rap anchors.

We must have missed the "Gargoyle" boulder at the top of the buttress.

From the top of the rock, either rap, climb some broken rock to the right of the snowfield, or put yer boots on and slog to the summit. Beware of avalanche conditions.

Pretty obvious from camp, look for the snow blob for the first pitch. Not many other landmarks... Don't go that far up the gully.

A single rack to #3 seemed plenty for us. 2 ropes is a good idea. Boots and at least one tool per person if summit. Crampons may also be necessary depending on conditions. Maybe an ice screw. We encountered some hard, blue ice in spots. If rapping, just shoes. Headlamp not necessary. 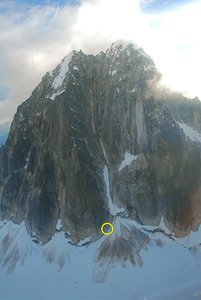 The Royal Tower. The Gargoyle Buttress is left… 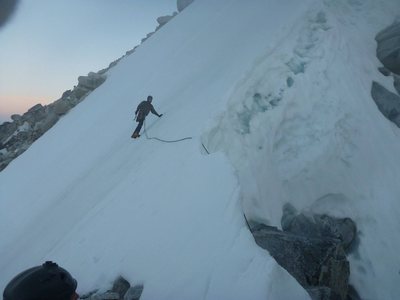 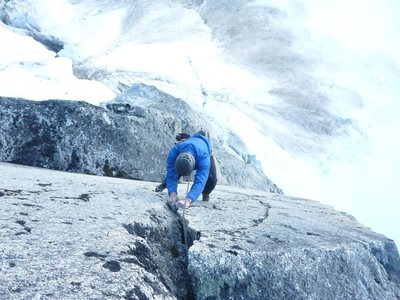 End of the 5th pitch. Gives a taste of some cle… 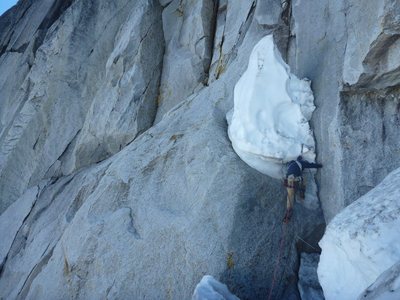 First pitch, gettin onto the rock