"Direct" meaning that the climbing is done as much as possible on the exact top of the narrow ridge - (also "direct" by a steeper entry to the S ridge). If the harder moves are avoided, then a similar route can be done at difficulty low class 5 (see South Ridge )

Commitment? Although the climbing is long, most of it is easy; and anywhere before the S summit, retreat (if dry) should be straightforward - and easier.

. (All latitude/longitude waypoints given below, along with other helpful waypoints and tracks, are in a GPX file linked from this page )

quick read
Most+best climbing is on S ridge. Unique white crystal high on N ridge. To skim the best: Climb the southern-most obvious buttress on W face up to S side of first tower on S ridge. Climb S ridge up to (highest) S summit. Traverse across Mid + N summits to crystal. Return S across summits + down full S ridge to col (shorter return to Mid summit + down W face).

Next objective is to reach a wide flat clearing below the southernmost buttress of the W face - about 0.2 mile / 330 meters SSE from the SE corner of Crystal Lake. Stay too low and run into dense bushes and fallen trees. Too high end up traversing across a talus field. One way that works for us ...

This clearing is about 240ft/70-80m below an obvious wide rock buttress which goes up to the S ridge, which is the southern-most obvious large buttress which reaches that ridge. To its left (N) (separated by a deep gully) is another wide buttress whose rock is more broken. There is another deep gully on the right (S) side of this buttress, not visible on the approach - (might be useful on a winter ascent?)

Between the clearing and the buttress is a steep-ish slope of talus. In the middle of that slope is a large single-trunk tree (about 2ft diameter) just below two large double-trunk trees. But likely it's easier to get to the buttress by a zig-zag path: first continue SE for about 50m on a track up a steep-ish slope, then turn L off the track and go about 50m NE to reach the slabby base of the buttress, where the rock slabs come down lower than anywhere nearby. There are two obvious big R-facing corners. The bottom of the left one has two large nose-shaped rocks one just above the other.
(lat/long ~ N37.5896 W119.0155) (alt ~ 10,000ft/3050m)
This is the start of the climbing -- up the W face of the S ridge.

alternate climbing start: To omit the West face climbing ...
From the second flat clearing, continue SE about 250ft/75m up a steep-ish slope, then S about 300ft/90m gentler, finally SE curving E for about 225ft/70m up one more steep-ish to get on top of the South ridge. Turn N and go about 500ft/150m up the S ridge (with some scrambling moves and rock-hopping) to rejoin the main route at the bottom of the first steep section.

climb W face of S ridge
. . (Starting here adds around 250ft of climbing to the route, not great like on the aretes, but has some interesting moves and some navigational "adventure", perhaps better than most of the North Arete. If you want to focus on the remarkable aretes, just omit this by hiking south to the col at the base of the S ridge.)

The objective here is to reach the S ridge near the top of the right (S) side of this buttress. Because this buttress connects to the southern-most "tower" on the ridge, where the "real" climbing up the S ridge begins.
. (Likely there are several climbable lines on this buttress ... We saw a party finish one toward the left side, but that does not fit the purpose of this overall route. What would be interesting to hear about would be a line with interesting moderate climbing up the center face and connecting to the top of the first ridge tower.)

What worked for us was to start at the bigger left one of two obvious big R-facing corners. We first weaved through two large nose-shaped rocks, one just above another. Up another 50 ft or so on L side of corner, then a tricky step down across R-facing corner into gully (class 4, not so well protected for the follower). We belayed at a chockstone after about 100 ft of climing. Then a second pitch another 130 ft or so, with some trending Right, then scramble to the top finishing at the R edge of the buttress (just above a deep gully). (? Another time perhaps we climbed and finished not so far right ?)

Difficulty mostly class 3 with some class 4 moves (but plenty of class 5 moves around if you want them - or if don't find the easiest line). Finish just S of the bottom of the first steep "step" going up the S ridge - (lat/long ~ N37.5894 W119.0149) (alt ~ 10110ft/3110m).
Gear: Used a 2-inch cam to back up belay anchor, nothing larger than that, and some small cams. Used some medium-large stoppers, but nothing small. Slings around and through rocks very useful.

arete to the summit
Climb the arete (narrow) section of the south ridge ... Up a steep section, then down a ways to a notch (this is the N (L) side of the obvious wide buttress seen from below W side). Up another steep, then a little notch, more steep, and some knife-edge sections.
. . The 12-15ft vertical S face of one of the blocks has an interesting crack that looks much harder than 5.6, so I've skipped that so far - (we await for a report on a fully direct ascent).

Final move to the knife-point South summit is a little overhang (can be avoided with an interesting traverse around W side). This is the highest point on Crystal Crag.

arete to the crystals
Down the north side of the S summit: Some thoughtful slabby moves, later a sequence of slanted positive holds [difficulty class 4, but might feel harder for those unaccustomed to thoughtful down-climbing). Up to the Middle summit (belay slings as of 2013).
. . (Do not attempt to descend the W face from anywhere N of here).

Down the north side (class 3-4) to a notch. Continuing past here requires a harder move to descend or return, so make sure your down-climbing skill is ready before continuing ...
Up a narrow gully on W side [low class 5], finish direct up W face exposed steep 10ft to N summit (can be avoided L finishing to little notch just past N summit).

Down north less steep to a remarkable shiny-white crystal mini-tower. Over this then down a little more on white crystal (some loose). No point in going any farther than the bottom of this top white crystal band - (Lower has lots more loose rock, a little of less-bright crystal, and only a few interesting climbing moves: If you need to experience it, try the North Arete route in the upward direction.)

descent
For the most arete climbing on the best rock: Return the same way back south to the South summit, then down the South arete. Instead of down-climbing the W face/buttress of S ridge, just continue all the way to the col at the bottom of the south ridge, then N down to the wide flat clearing below the obvious buttress. Out the same way past the pond to Crystal Lake and the trail to parking.

The great advantage of the returning the same way is that you get to experience the wonderful ridge-top granite climbing again (another 1000ft!) but with the moves feeling very different, because all the downward moves are now upward, etc). Reversing some of the overhang moves could be fairly exciting (or impossible?) for non-tall climbers (so fortunately they're avoidable).

alternate descent: From the SW side of the Middle summit or the notch between the Middle and South summits, go down the West face. Much loose rock and dirt. Many slopy moves. Hardest moves might be at the very bottom. Difficulty might be class 3 with perfect navigation - better to be prepared for some moves at class 4.

? other descents ?
. Do not attempt to descend W from between the North and Middle summits.
. Descending the lower pitches of the so-called North Arete route (mostly not on the arete) below the crystals has lots of loose rock and then an unavoidable 5.7 or 5.6 move at the bottom.
. It is also possible to descend the W face starting near the S summit -- see the South Ridge route.
. For those with extra energy, and a desire to experience alpine sand ... from the S end of S ridge, hike SSW up onto the Mammoth Crest, then follow the Mammoth Crest trail W then N then NE back to Lake George parking - (adds about +600 vertical feet uphill, mostly on steep sand), then flat hiking on a wide expanse of sand, before long downhill (adds 1.5 mile distance).

GPS . All latitude/longitude waypoints above, along with other helpful waypoints and tracks, are in a GPX file linked from this page
. But they're given mainly for planning + reference. For experienced parties using the detailed instructions above, carrying a GPS device should not be necessary for navigation of approach + route in good weather.

Rope less than 30 meters and long slings for the arete sections (possibly a selection of cams). The leader should be skillful in protecting by running the rope around different sides of rocks and horns along the arete.
60-meter rope and light trad rack for starting up the Southern buttress of the West face to reach the South ridge. (Or to save weight and time, parties who would otherwise need to belay up the W face could just skip the W face start, and do the alternate start from S col.) 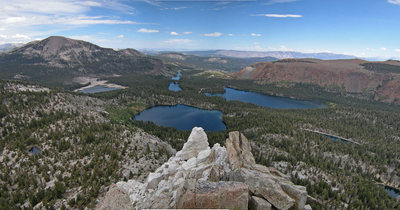 north from the North summit to the crystal section 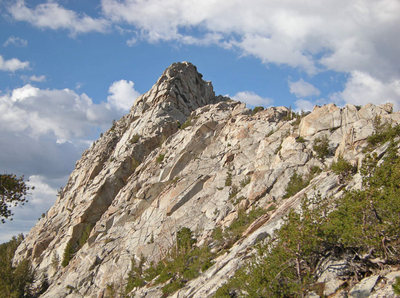 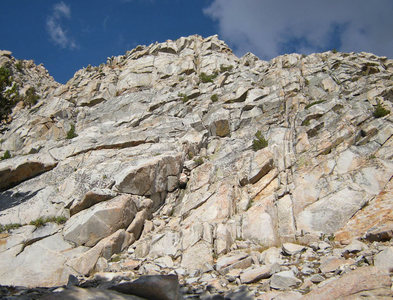 base of southern-most buttress - close 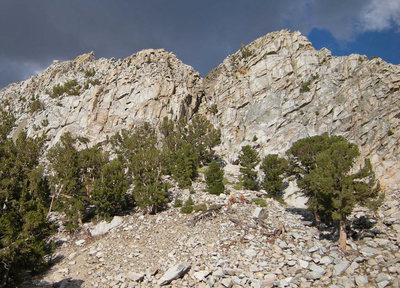 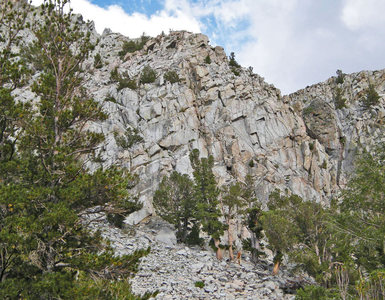 SE up to southern-most buttress of W face 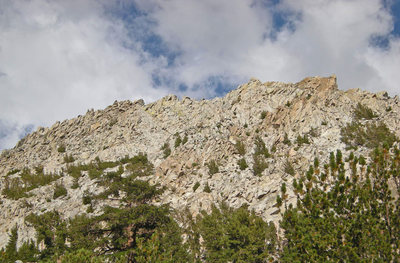 up to summit aretes above W face 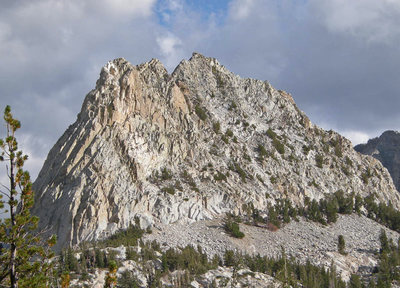