Taken by themselves, each pitch may not be three star worthy for one reason or another, but together they represent a sustained, engaging, long route that tops out which is pretty nice.

P1 (5.8 PG): Climb easily up flakes below the yellow birch to a stance at the horizontal crack (gear, critical) pull a tricky friction move (crux?) and climb the clean slab to a right-rising rampish thing and a bolt. Surmount the short bulge and climb te right-leaning/rising flake/crack system to a grassy ledge with a large oak tree belay. 80'

P2 (5.10): From the belay, climb the short/shallow left-facing corner to a bolt and work to right to better holds and a stance (crux 1?). Pass a couple good horizontals (gear) and climb the slab passing four bolts (crux 2) to a stance at a debris filled crack (still able to get a good piece). Tricky/thin moves exit from the crack to the shallow ledge system, step left to a fixed anchor. 100'

P3 (5.10): Trend up and right with minimal gear passing a hollow flake that forms a crack (dubious protection) till you can step right into a crack (gear). Climb up passing a crashpad sized flake gaining a vegetated ledge. Punch through the crap to the base of the steep headwall. Gain the headwall (being careful between the first and second bolts) and make increasingly difficult moves to tricky move before the headwall ends. Either make a tricky mantle, or alternatively hand traverse right 4' and climb a dirty but positive left facing corner to a stance. Climb slabby steps passing horizontals (gear, think about protecting second after they unclip the last bolt). Ultimately trend right and belay at a fixed anchor just left of an oak tree. 100'

P4 (5.9): Climb up to the lone bolt and then run it seriously out through "stair steps" in the bulge. Pass a couple horizontals (gear) and meander through the easiest line until a short steep slab with a bolt. Climb the slab or step right 7' and easily climb a right-facing corner/flake system and slab to the base of the bolted headwall. Climb the headwall (fun/awkard) to a hard exit to a less vertical section (semi poorly placed directional, clip long). Trend up and left (gear) to cool features, a stance, a bolt, the last couple moves, and a mantle finish. Belay at chainset 6' right of the prominent cedar tree on the ledge. 160'

To descend, rappel with double ropes from the top of P4 to the top of P3, then make one more double rope rappel to the base of the cliff (which gains elevation from the start of the route).

Start: About 30' right of Requim look for a lone healthy yellow birch growing about 20' up.
Descent: Two rappels with double 60m ropes

Gear: Single rack from micro cams to #1 C4, 12 draws with some shoulder length slings in there. 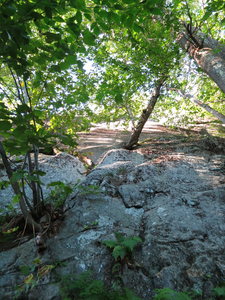 More About The Deadline