This route climbs a pinnacle that is part of Fremont Peak's complicated west face. While it does not go to Fremont's summit, it is nevertheless a worthy route that contains lots of nice climbing on good, protectable rock.
The only way we could figure out how to get off the top of the pinnacle was to rappel, and the absence of any existing rap anchors when we arrived on the small summit leads us to feel safe in claiming the first ascent of the pinnacle. Still, it's hard to be sure of first ascents in the Winds, and the thought of a crusty, anonymous hard-man chuckling to himself over a so-called "first ascent" makes me take any new route brouhaha (including my own) with a grain of salt. Be that as it may, we started calling the pinnacle the Marmot's Tooth, and we hope other climbers will find that as fitting as we did.

Biginner's Mind climbs the west and south faces of the pinnacle immediately left (north) of the West Face Spire. This pinnacle blends in with Fremont's jagged north ridge, and it is not very apparent when looking straight on.
The climb begins on the left edge of the Marmot's Tooth's west face and angles right up an obvious ramp to a large ledge system that divides the lower angled lower section of the pinnacle from the steep upper section.
From the ledge system, the climb wraps around to the south side of the formation, trending right for two pitches before traversing back left to gain an obvious dihedral. From the dihedral the route-finding is pretty straight forward to the top.

Start: Locate a pillar feature that points like a finger to the bottom left terminus of the obvious right-angling ramp that slashes across the lower west face of the Marmot's Tooth. To the left of the pillar is a wide chimney formed by opposing right and left facing corners.
Scramble up 3rd/4th to a grassy ledge at the base of the pillar.

P1: Climb the right side of the pillar following low-angled laybacks and underclings to an alcove. 5.7, 60m

P2: From the alcove we took a short dihedral slightly to the left of the belay and climbed around the right side of a fun, blocky overhang. Continue to a large grassy ledge on top of the pillar at the base of the ramp. 5.8, 45m

P3-5: We climbed the ramp in three pitches of nice slab climbing to a comfortable ledge at the base of a right-facing corner. 5.7-5.8, 135m

P6: Climb up the fun right-facing corner. At the top of the corner traverse right and climb up a short dihedral to gain the large ledge system at the base of the steep red face. 5.8, 60m

Walk up 3rd class and move the belay several dozen meters right to the extreme right corner of the face - the point where the south face meets the west face.

P7: Climb up and right around bulges and along slanting cracks. After about 40 meters, climb up a shallow dihedral that begins from a narrow sloping ledge. Follow steep rock with small cracks and fun holds, step right of a small overhang and continue up and right to a good stance below a short dihedral that terminates in a small roof. 5.10-, 55m

P8: Climb the dihedral and step to the right of the roof around a small arête. Alternate between the right-facing corner above and the face to the right to gain the ledge at the top of the corner. From the ledge step right and follow discontinuous cracks and face holds up and right through the steepening face. Stem and finesse your way past a loose triangular block and a small bulge to a semi-hanging stance below a fixed pin. Belay takes a green cammalot plus finger sizes and small wires. We installed the pin to help protect against a factor two fall). 5.10+, 25m

P9: The goal of this pitch is to get to the base of a dihedral that you'll see hiding up and left beyond the roofs that are above you. Awkward moves lead left around a small roof. Continue up to a second roof and traverse left under it. Continue left several more meters on tenuous but positive holds to a thin crack. Climb up using cracks and crimps, then work back to the right. Follow a finger crack to a good stance at the base of the dihedral. 5.11-, 25m

P10: Chuckle your way up this steep corner. At the top of the corner, follow cracks and choose your own adventure to a spacious stance on top of a large pillar. Belay beneath an ominous looking slot. 5.9, 55m

P11: Thrutch your way up the slot, dubbed by Eva "The Luna Squeeze". Follow the crack above the slot up and right on much easier terrain to a ledge ledge on the right (south) side of the summit block. 5.10+, 20m

Rap the south and west faces.
R1: 45m to the base of the Luna Squeeze.
R2: 55m to the base of the pitch 10.
R3: (THIS IS A ROPE STRETCHER!! WATCH YOUR ROPE ENDS!!) 60m to the left of the route to a small triangular ledge more or less directly above the start of pitch 7. It is an easy 6 meter downclimb to the large ledge system.
Scramble down to the top of pitch 6.
R4-6: 3 more 50m/60m rapells down west face, angling right (south) to gain 3rd class ledges that lead again right (south) to the talus below the West Face Spire.

We carried:
2x - blue TCU to gold Cammalot;
1x - #3 Cammalot
1x - #4 Cammalot.
Many Wires
That seemed about right, although we could have done without the #4. P11 would protect well with a #6. Otherwise you won't want to fall.
Bring two ropes + extra cordage to reinforce rappels. 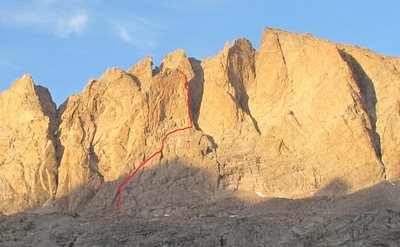 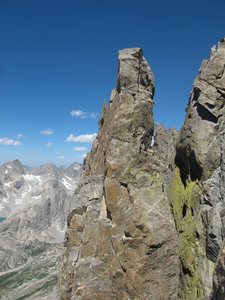 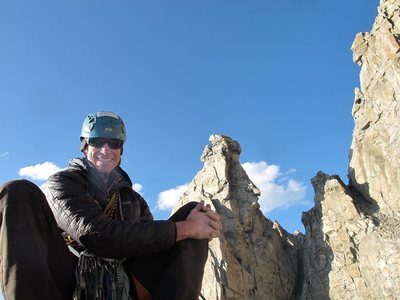 Jake on the Marmot's Tooth. 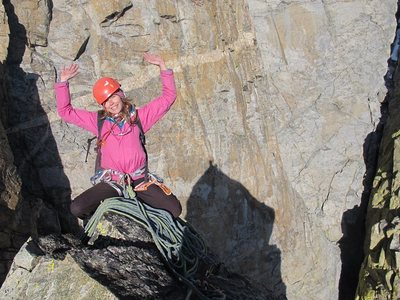 Sun and shadow on top. 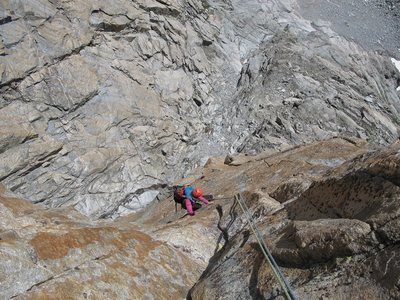 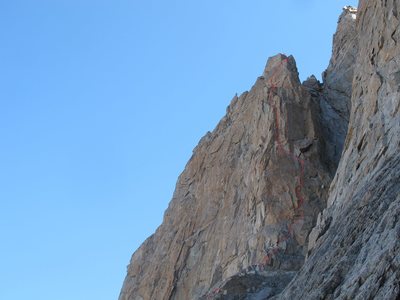 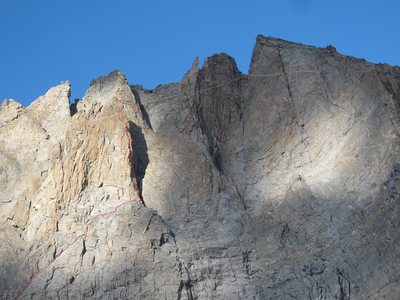