A proud line up an impressive buttress of generally high quality schist. The fact that this route was put up on lead is humbling to think about as you find yourself hesitating trying to figure out how to get to the next bolt. For the FA team, there wasn't a next bolt.

Even being fully equipped, the route is a good 5.11 for the 5.10 alpine climber and not suitable for an inexperienced party.

(9/2019) This route has been retrobolted by the FA party and has gotten the glorious Gregg Kuchyt treatment. All bolts have been inspected and anything suspect was replaced with high-quality glue-in fixed hardware.

P1 (5.11/5.11-): Clip the first bolt and climb steeply to the base of the roof. Fire out the roof on good holds and then figure out the exit strategy before the gas runs out. Above the roof, moderate face climbing past a few bolts leads to a spacious belay stance on a ledge with a fixed anchor.

P2 (5.10): Move right and climb easily over stacked blocks and cut back left on the high angle ramp to a small roof, a groove, and a bolt. Make a reachy move (harder if short/lacking on reach) into the groove and follow bolts up to a sloping ledge. Step right and climb some fun face trending left to another sloping ledge. Climb up the opposing faces to an awkward step right to a stance, below the "plated roof". Trend up then left and out of the roof system to a stance below the vegetated ledge. Make oddly unnerving moves topping out on the vegetated ledge to a fixed anchor in a big block at the front of the vegetated ledge.

P3 (5.10++): Move the belay back on the ledge about 30' at the obvious impacted area. Some enjoyable moderate climbing leads to a stark series of physical mantles and finally a stance. Some more technical face climbing leads to a welcomed slab and a fixed anchor. The rock quality on this pitch takes a turn for the less ideal. There are a few loose plates/flakes/blocks in the vicinity of the route. Climb accordingly.

P4 (5.10-): Gingerly move left off the belay and clip the first bolt. Some easier slab climbing leads to a left-leaning seam that turns into a left-facing corner (crux) under a block. Some cool moves left under the block and up between the block and the diving boards leads to a fixed anchor.

Start: About 100' down from the vegetated shoulder that bisects the base of the buttress. Look for an obvious 3 foot deep roof 20 feet up with a low glue-in bolt on its right side.
Descent: Single 60m rappel. Be careful on the rap from P4 to P3. First you have to swing right a fair bit and second there is a rope eating detached block down and left of the P3 belay. If your rope gets snagged, you can fix off the anchor and tension over to the edge of the slab to attempt to free your rope. 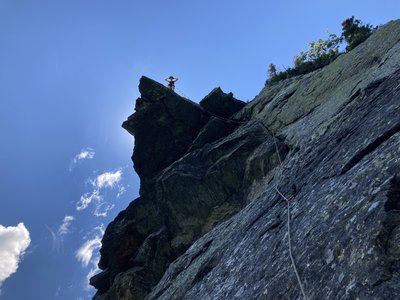 Route ends on top of the diving board. Great ex… 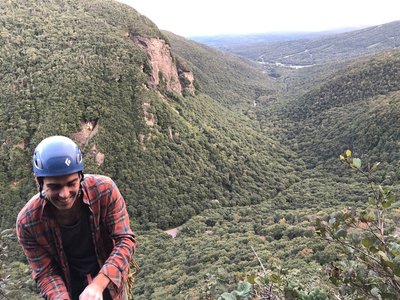 Rapping off the vegetated ledge top of p2

More About The Deep End