Prime Rib of RURP is an old Steiger/Ringle aid line from 1978, that, in all likelihood, hasn't been climbed much in the 35 years since it went up. Steiger's guide originally lists it as 5.10 A3+, with the aid section going on RURPs and a bolt. The possibility of freeing It was in the back of my mind for a while, then while replacing a bolt on Cream of Belay next door, Prime Rib looked like good, technical face climbing on great rock.

So with John Steiger's blessing, old bolts were upgraded (thanks to the ASCA) and new bolts were added to the aid section and it now goes free. Aside from replacing the original hardware, only 3 additional free climbing bolts were required. Also, while I was dangling and laboring around on the climb, a new variation (Tide Me Over) to the first pitch was spotted by Alex K, adding an awesome start to gain the striking arete.

P1: Tide Me Over. Rather than climb the somewhat loose original 5.8 start, launch up into the series of horizontals out on the face to the left. Fun pulls and traverses on jugs, bomber gear, and one move in the 10+ range midway through allows you to eventually gain a ledge beneath the arete. The arete climbing is moderate, has great position, and is fun as hell. This pitch is probably 3 stars by itself. 2 bolt belay with quicklinks and biners, 75 feet.

P2: The former aid section, and now the free climbing crux. The 4 bolts take you through very subtle, technical, and high quality climbing. A thank god chockstone jug marks the end of the difficulties, with a just a hint of Reef excitement from here to the anchor. 2 bolt belay with quicklinks and biners. 50 feet.

P3: A few committing moves out right gains the obvious horizontal ~10 feet up, then 2 more bolts lead to the top and a gear belay. It essentially ends on the ledge above the finishing boulder on Cream of Belay, and down from the topout of Rapture's 2nd pitch. 75 feet.

The best way down off Neptune, if you're not walking off, are the Jimmy Dean raps, which require a 70m rope (or 2 ropes).

On Neptune's upper west face, between Rapture of the Steep and Cream of Belay.

Singles, micro to to #3BD, stoppers, and draws. 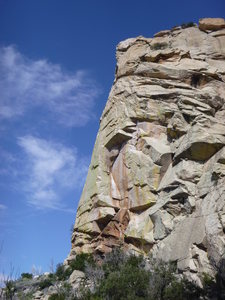 A striking view of Prime Rib of RURP and Cream… 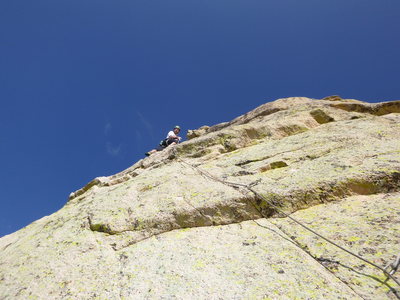 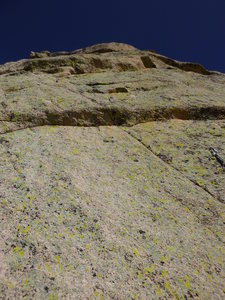 More About Prime Rib of RURP