Routes in The Coliseum

This climb is actually much better than either the topo or first appearances would lead one to believe. One of the would-be detractors include that the climb does pass a few small plants, but these are not difficult to pass. The other is the the yawning slot up top, which could be skipped by traversing left up a 4th class ramp up top to the amchors on Frozen In Time, but it should not be. This 'slot' turns out not to be a slot at all. It has positive holds just inside on both sides and can be climbed as a layback flake or on fingerlocks. It accepts second-knuckle sized gear on one side or mixed-sized cams on the other. Once topped out of the flake, one can wander back and right onto the lower angled rock, or up and left through jagged cracks with good gear to the sumit (and rap as for Hollow Man).

This is the crack system just right of P2 of Lost In Time.

A standard light rack - despite the apparent 'slot' up top, no wide gear is ever needed. 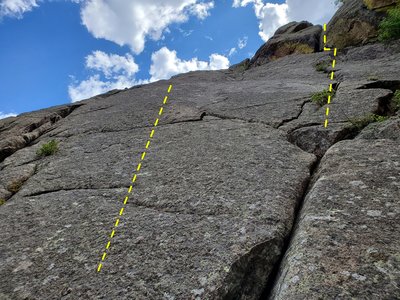 More About Wrinkle in Time