Routes in One Of These Days Buttress

This sport route has roughly 10 bolts and starts directly to the left of One of These Days. The route starts with mid .11 moves through the first roof and into a small corner (bolts on the left wall outside of the corner and then by the second roof (4th bolt) becomes a series of hard .11d moves with little rest to the chains. Several holds have been reinforced. While there are some big holds, mostly in the form of underclings, there are generally no real feet near them. This keeps the route very pumpy and very sustained.

Paul Jensen: "Starts with a traverse going to the right past two bolts. The third through fifth bolts take you into a corner with technical 11+ moves. There's another 11 move above the 7th bolt. The crux comes after the 9th bolt. There are some 10+ moves near the last bolts on the route. This is a very sustained route with many fun but technical moves."

Starts under the large roof to the left of One of These Days. 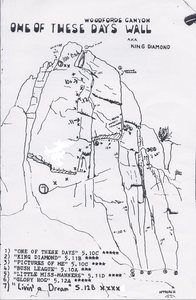 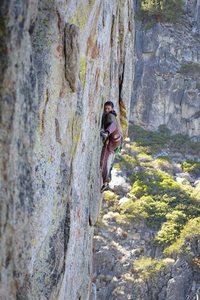 More About Livin' A Dream