The longest route on iRock, the West Ridge route follows the path of desired course along the western ridge. What it lacks in technical difficulty, it more than makes up for in adventure and aesthetic value. The broad Zig Zag glacier to your right, and the Reid glacier, its headwall, and the storied Yokum Ridge in full profile to your left, you just might spend more time taking in the sights than climbing.

The route, like most on this wild, adventurous rock, is not clearly defined, leaving one to pick his own path and make of it what he wants. At the top of the West Chamber, one is confronted with two immediately obvious lines- an easy cracked slab to the left, or a steeper, broken stack of chunks forming a dihedral of sorts to the right. The 5.4 rating is given to the face version- having never attempted to ascend the dihedral, this author cannot give a rating, but would estimate it at closer to 5.7 or 5.8. Farther out to the right, still, is the chunky buttress known as the West Gable, and will likely become your path of descent later on.

From the top of the slab, follow the line of prominence to the summit ridge, carefully checking every hold before weighting it. The exposure opens up significantly here, and while the climbing is still not terribly committing, some individual moves are, and it's a long way down.

Pulling up onto the summit ridge, the fun has only just begun... the path is obvious, but the safest way to go about it may or may not be. Seize all opportunities to traverse lower, as there are a couple of spots where the ridge blocks appear to be defying gravity. Past both skylights, the final stretch of ridge is probably the least solid- don't trust any one hold to human life.

Descend the upper ridge to the lower ridge, or the top of the West Gable. Traverse to the west end of the West Gable and find the prominent boulder there- around the base, likely buried under a foot or more of rime, you shall find about 4-5 strands of tat in the form of cord, rope, and webbing. There should also be at least two BD carabiners somewhere along there that you can use to thread through, but some asshole may have bootied them by the time you read this. You can rap back down the face you climbed up to the snow and rock fields above the West Chamber, or, faster, you can actually rap straight down into the South Chamber, but I think you'll need twins to make it in one jump.

Approaching iRock from Timberline, cut left (west) under the prominent gully on the SE of the rock, continue west past the steep block and crack lines to the second large, prominent gully, called the West Chamber. Ascend the gully, protecting the 50 degree snow/ice with pickets or screws, conditions depending, to the ridge above. The West Ridge rises above you.

Short screws when good ice is available, cams to 1.5", thin rack of nuts. Pins are never a bad thing to have on the rack. Few really good cracks exist, and slung knobs will likely be your best protection up high. 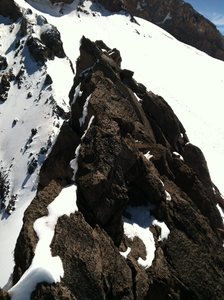 Part of the summit ridge 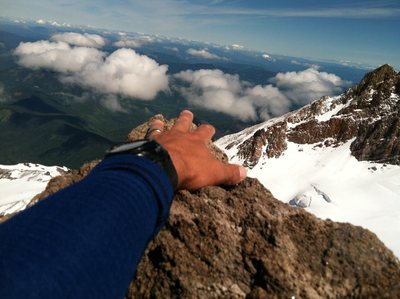 Reaching out to touch the highest point of the… 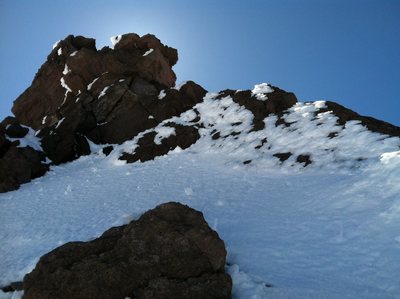 Last snowfield up high, last piece of the West… 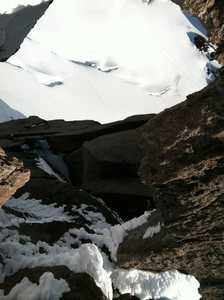 Looking through the first "skylight" at the Rei… 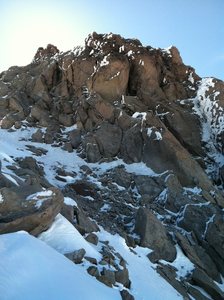