Looking at the north face of Mt. Olympus you'll see the "West Slabs" on the right side of the mountain -- Kamp's Ridge is on the skyline on the left. This ridge is approached via Neff's Canyon, and good directions to the trailhead can be found here:

There is also some information in the Ruckman/Falcon guide for the Wasatch.

To reiterate - park at Neff's and follow a broad dirt road/trail to a stream crossing where the trail forks. Head right here. The trail gets pretty faint, and the bushwhacking, depending on where you go, can get pretty nasty. You're essentially following a drainage, getting good views of the ridge earlier on and then just glimpses the closer you get. Takes some scrambling to get back there, and once you're out of the drainage you'll see a series of 3 or 4 ridges that all give you options for ascent. My partner and I started on one too far back and had to traverse over to one that worked better for us and seemed to have the best climbing, second back from the skyline. The lower part of this ridge had excellent scrambling and was nicely aesthetic.

The approach will take the average person between 1-2 hours, depending on how effectively you're able to navigate the faint trail after the stream crossing.

As you get closer to the upper portion of the ridge where you cross over the Great Chimney and Valhalla, the two ridges closest to the skyline consolidate into one while the others run up to the sub-peaks between the north and south summit.

You'll come to a shoulder where the ridge sharpens and you have an amazing view of the slabby north face. The route does not stay directly on the ridge, but uses cracks and ledges to traverse the face below it. You'll come across a few pitons here and there.

This is one of my favorite ridges in the Wasatch - the climbing is very exposed, sustained at the 5th to 5.4 level with a 5.6ish crux, incredibly aesthetic, rarely visited, and has phenomenal views. In my humble opinion this is one of the best routes on the mountain - more difficult and sustained than West Slabs and Geurt's Ridge (or South Ridge of Superior).

For good descent options (all of which involve rappels *ninja edit - this is incorrect, there are at least two descents you can do without rappels, I've detailed one out below) check out the summit post link mentioned earlier, or, for a really fun finish, do "The Goddess Traverse," i.e. the scramble across the myriad sub-summits (class 3,4) to the south summit and take the standard trail down (requires two cars, one at Neff's and one at the standard Olympus trailhead).

You can find more info on the "Traverse of the Goddess" here: mountainalbum.com/mountains…

EDIT RE: NO RAPPELS DESCENT BETA - I went out and solo'd Kamp's today, planning on doing the scramble descent to skier's left of West Slabs and then just hiking the neighborhoods back to Neff's. As I was descending from the North Summit down the western ridgeline I came to a col of sorts where there was a small fire ring. From there a moderately steep dirt path cut down to skier's right. It looked like it had seen foot traffic so I followed it down until it opened up, and then I just kept traversing right until I could see the Neff Canyon parking lot. I scrambled down into a drainage that also looked like it had seen foot traffic, and that funneled me right into the main Neff's Trail. Super easy, no rope needed, just a little routefinding and some easy scrambling. I crossed a few encouraging cairns along the way.

Light rack. One set of cams and a set of nuts will be more than enough. If soloing, be aware that there is some loose rock interspersed between long sections of great rock, keep your head about you. 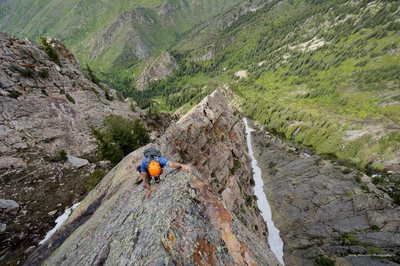 photo: Mooner Here again you can see the var… 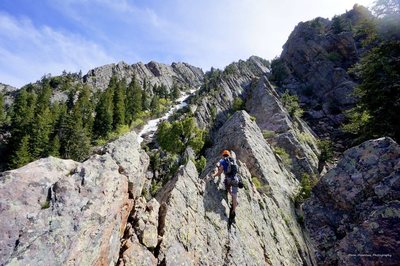 photo: Mooner As you can see there are multi… 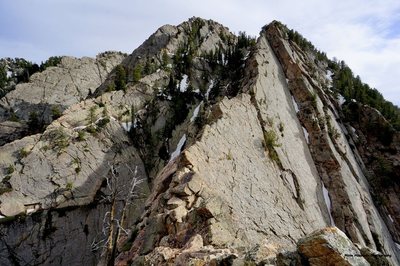 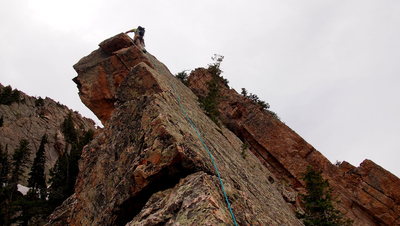 The one section we roped for. There was an old… 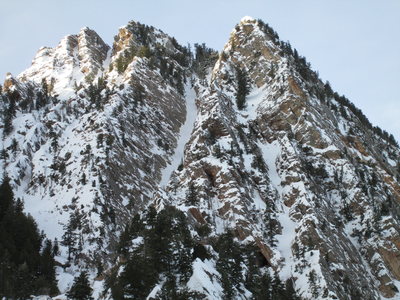 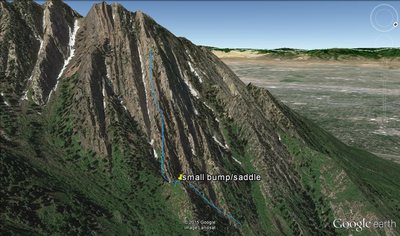 While not a real photo, hope this helps. 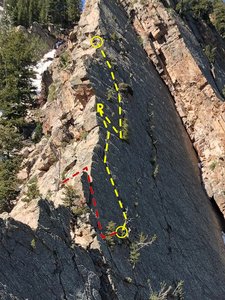 Belay from ledge with dead tree up wide cracks.… 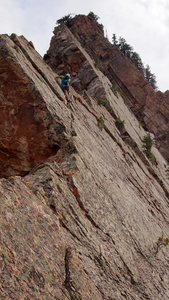 Mooner traversing just below the ridge on the u… 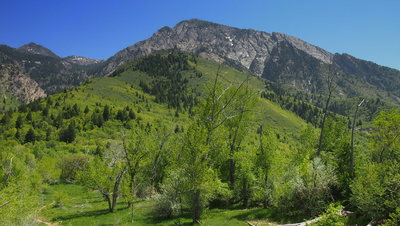 West Slabs are on the far right, Kamp's Ridge i… 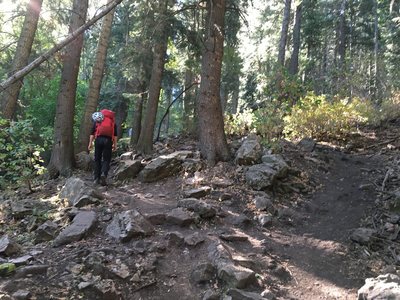 ~35% of the way along the approach super def… 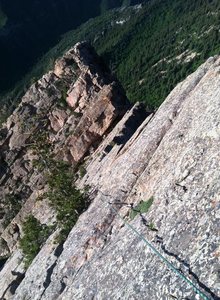 looking down the roped section 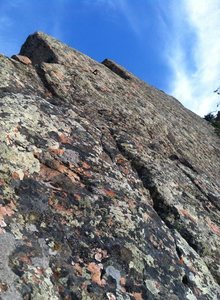 Found a piton on the crux section! woot