Left Cleft is a scrappy mixed line on Hallett Peak's eastern flank. It is, as stated in the name, to the left of The Cleft. I believe this route would be superior (than the conditions in which we found it) in late spring (i.e. March or April). The crux pitch is pretty engaging and sustained throughout its duration. This route can be climbed quite quickly. Brent and I did it in under three hours.

Approach as for Hallett Couloir or The Cleft. Before reaching The Cleft (a narrow couloir roughly 200' to the left of Hallett Couloir), head up a broader couloir for 400' aiming for a steep, rock groove.

P1: climb the broad snow filled couloir for roughly 400'. We climbed this unroped, moderate snow. Belay at the base of the steep rock groove.

P2: fire up the groove. In late Spring, this would likely be filled with a small amount of ice. We found it in pretty sloppy, dirty conditions. The climbing is not extremely strenuous, but there is quite a bit of loose rock, though the pro is adequate. Belay at the top of the gendarme to the left of the obvious snow couloir to the right, 190', M4 (R?).

P3: this pitch is shared with The Cleft though belaying at the gendarme will significantly reduce the length of the pitch. Step right into the couloir, and move up towards the obvious roof. Pull through the roof on turf sticks and stemming. Once over the roof, continue climbing to the right of a rock buttress, 160', M2.

Single rack to #3 Camalot. Knifeblades may be handy in the crux pitch. 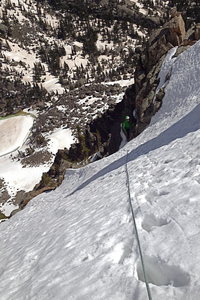 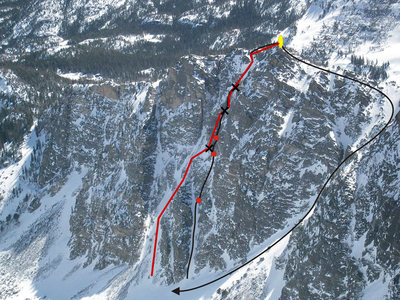 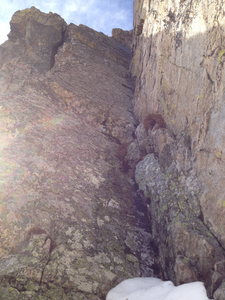 Pitch two groove. This is a sustained groove wi… 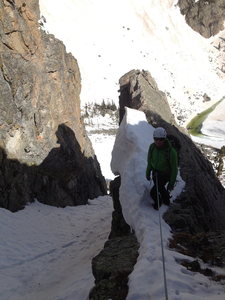 This is Brent at the gendarme belay at the top… 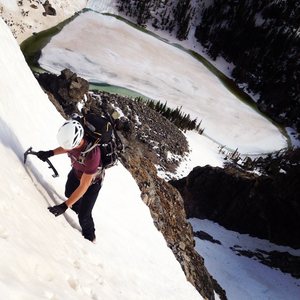 More About Left of Cleft