A great ice climb with a very steep middle section but generally good gear and belays all the way up. It is normal to rap the route after two pitches (if nobody else is following) or traverse round to the left and rap off some other anchors. This makes the route very popular on poor weather days when people don't want to climb any higher on the mountain.

However, the climb can be taken in another 3 (long) pitches to the crest of Tower Ridge, just beneath the little tower. This excellent continuation doesn't increase the difficulty of the climb and is highly recommended!

Start on the Western side of Tower Ridge, about 50m up from the Douglas gap, at the base of an icy gully disappearing into a narrow chimney.

P1. Climb the icefall, sustained but pretty steady for a full 60m to a belay on lots of fixed gear on the left of the gully. Some mixed moves are required in the middle section, and some rock gear can be used on the right wall of the gully.

P2. Swing out right from the belay onto the steep (at least vertical, conditions dependent) ice. Make very strenuous progress to an easing. Continue up the substantially easier gully with rock gear (some fixed pitons) on the right to a steep exit left. Belay on in situ tat on a spike/slung boulder.

From this point you can rap the route from the in situ gear, or carry on up to Tower Ridge

P3. Move up and right on easy snow, looking out for rock gear on the left, until you reach a piton and nut belay somewhere on the left wall at about 60m.

P4. Carry on up the broad gully heading for an obvious ice fall coming out of a chimney. Take this at about WI3 and carry on going until you find some semblance of a belay. (There are a few poor rock spikes to sling on the left.)

P5. Easier progress up the gully then trending left takes you to the crest of Tower Ridge

The route starts on the Western side of Tower Ridge, about 50 above the Douglas gap. The route is the obvious steep icefall disappearing into a narrow chimney. 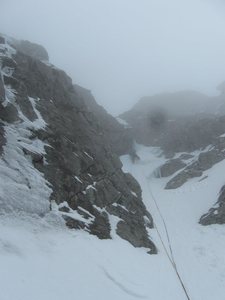 The P4 ice bulge, with some cloud coming in.… 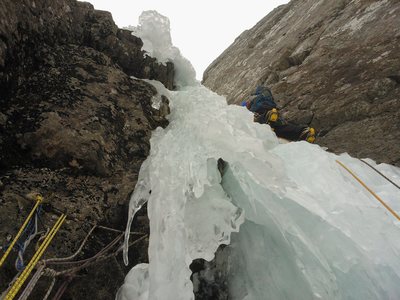 The steep start to the second pitch. The array…