The route shares the first 4 pitches with the "Spigolo" Route, and a major traverse ledge is followed to the left until a bolted anchor is reached. (ca. 25 meters). Some relatively unprotected face is followed upwards (20 meters) to another stance (5.5,bolt). Another pitch diagonals L, unprotected face (5.4-5.5, Bolt). The next pitch (crux) is a traverse to the right and a belay stance at the base of a chimney (5.6, bolt). The chimney is followed upwards for 2 pitches, and after skirting a small roof at it's left edge,traversing into another short chimney, where the difficulties begin to ease. Aim towards a small notch in the N. Ridge where the route terminates after another 4-5 pitches.

The route is reached by parking near the Hospital and strolling over the rising meadows to the R. base of the wall. Climbers path is evident.

All belay stances are bolted. Very little fixed protection. Bring a normal rack with some larger cams up to #3 Camalot. 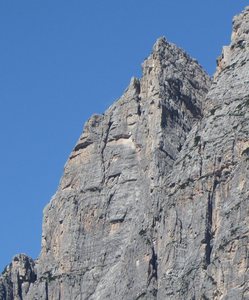 Upper portion of the Punta Fiames, shows the ch… 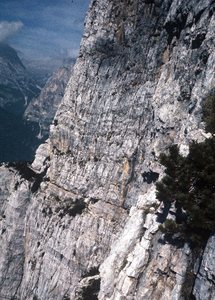 Looking across the face towards "Via Commune,"… 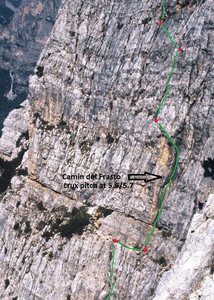 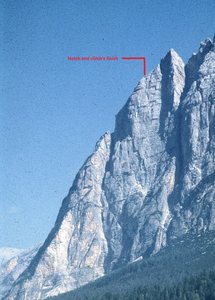 More About South Face, "Via Commune."