The first two pitches are pretty forgettable, but the last five pitches, off the big ledge, are worth the approach. The crux is probably the fourth pitch, Alvera Traverse. Don't forget to sign the register can in the hole at the end of the pitch.

P1, 30m, 5.6: Climb the chimney/crack past some fixed gear to a piton/thread belay on a ledge out right.

P2, 30m, 5.6: Climb up and left on easy terrain towards a block/tower. Climb this feature past a piton to an anchor on its top.

P4, 15m, 5.6: Traverse right on a fun and airy traverse with fixed gear to a ring belay in an alcove.

P5, 32m, 5.6: Leave the alcove on the right past a piton, then climb left and up on steep rock with good holds but limited gear to a thread belay on a ledge.

The last two pitches are pretty loose in places. Try not to knock anything down on the climbers below.

To access the route, take trail 442 from Rifugio Averau around the left side of the peak. After about 100m you'll come across a faint climbers trail that leads up towards the peak. This trail leads to a broken chimney/gully. Climb this 4th class gully for about 25m to reach another trail that meanders through the grassy scree to the main wall and the beginning of the first pitch. Total time for the approach from Rifugio Averau is about 10-15 minutes.

Standard Dolomite rack. Stoppers and Cams up to about 3". Long slings and free biners are helpful. 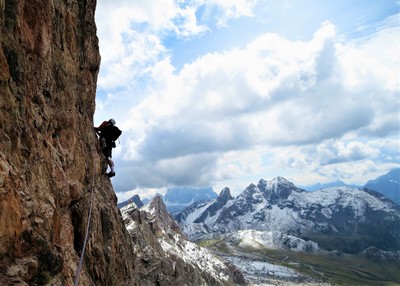 Kim Miller (RKM) on the crux traverse with a cl… 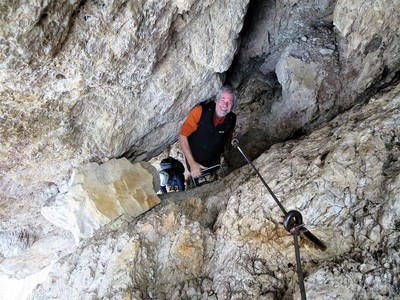 Descent is by an easy walk off the summit (made… 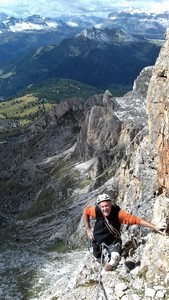 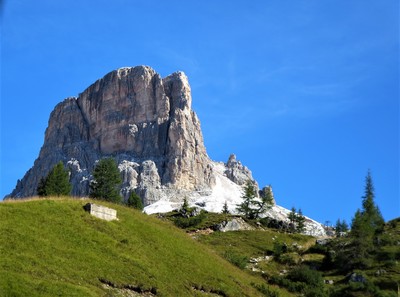 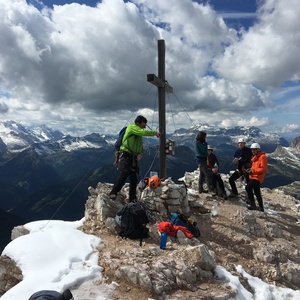 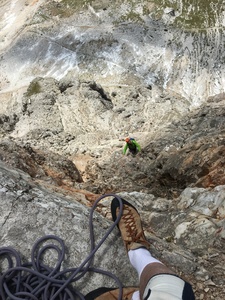 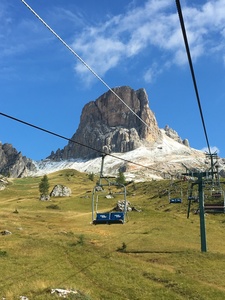