This is one of the longer lines on the mountain, and is fairly committed. Depending on which variation you do (there are probably a half dozen established variations, and even more possible), there are between 4 and 7 ice steps, ranging from 10' to closer to 40 on the upper reaches. The steps are technically not difficult, as ice goes, but probably exceed most climbers' single-ax ability- two tools is advisable.

Route-finding seems to be the biggest difficulty climbers have on this route. A number of parties have gotten lost and stuck on or among the towers on the upper section, primarily when trending too far south (climber's right) and running into dead-ends at the sharp, jagged ridge of the far western rim. Climb in good visibility, if you're unfamiliar with the route... and if in doubt, go left.

The west-face is the mountain's windshield, taking the brunt of the frequent storm systems blowing in off the Pacific. The snow field above the headwall is often covered in a thick, heavy blanket of rime feathers. Once disturbed, these break off and crash into all the feathers below, creating literal ice avalanches running down the west face. It can be a major bowling alley. The numerous couloirs and towers were carved out by these frequent barrages of shit. It's not uncommon to see actual rivers of debris cutting deep runnels into the snow in the low spots of the couloirs- several feet wide by several feet deep.

From the top of Palmer, cut across the top of Zig Zag glacier to the "Saddle," or the col between Illumination Rock and the mountain proper. Looking NW from the saddle, the Reid glacier is below you, and Yokum Ridge will be clearly visible on the other side. An entirely different route, Leuthold's Couloir, is the gully between the upper section of Yokum Ridge and the mountain proper- Stop short of the lowest cleaver of rock between you and Yokum, and turn up from there. This is the base of Reid Headwall.

From here, it's basically just a matter of picking your path, trending slightly diagonal to the left. Once above the first step, you'll note more gullies/towers directly above, and a small hogsback diagonally left. crossing over the hogsback and cutting up the couloir to the left will put you in good position for finding the rest of the route and topping out on the upper rim (summit ridge) instead of ending up stuck on the lower western rim.

Descend the "Old Chute," which will be the obvious, easy ramp heading down into the crater from the knife-edge you traversed to get to the summit plateau.

This is a great route for a running belay. It's not technically demanding, falls (of competent climbers) are unlikely, and it will save a ton of time. Especially if the mountain is shedding rime- speed will be in your best interest.

Otherwise, a basic alpine ice rack- handful of screws, two or three pickets, and some alpine draws from single to double-length. Good ice should be abundant, but not always right where you need it, when you need it. 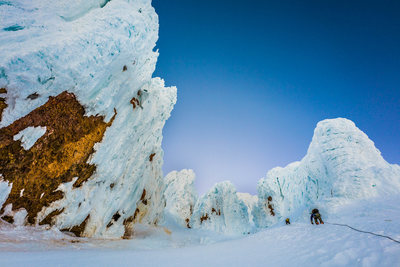 We had mostly soft ice at the headwall. 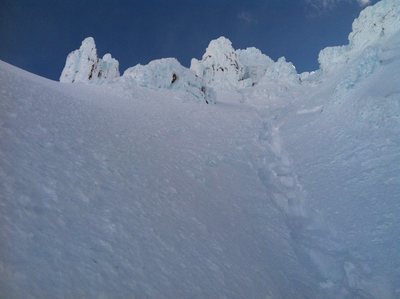 Above the first step, it's best to cross the ho… 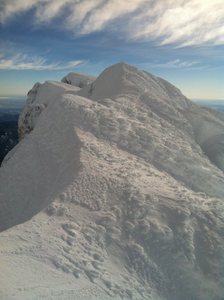 Top of the rim, summit plateau is the farthest… 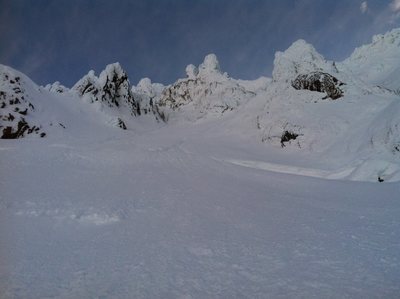 Looking up at the lower section of the route, f… 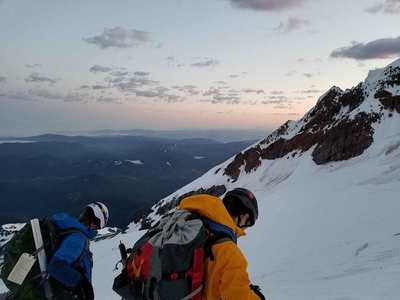 looking down at the glacier