Routes in Hall of Justice

This is the second route from the right side of the cave, it is usually fixed. Its name is written on the wall in chalk. This route has sparked a bit of a grading war, but this cave is actively degrading, sometimes this makes routes harder, sometimes easier. Having climbed all the roues in the Poser's Lounge in the days prior to sending this, I'd say its really not much harder than Cinnamon and Cider (another great addition by Jason Nelson) or the Cave Traverse, maybe a bit, thus the +. I feel the crux is up above the lip where your pump makes the moves feel long and delicate. Under the roof, brute strength will see you through the difficulties.

It is the second route from the right side of cave.

It should have fixed draws. If not, a dozen should get you to the chains. 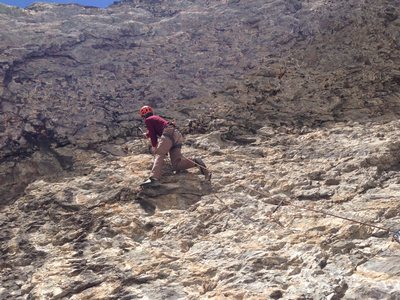 Matt on Pull the Trigger.

More About Pull the Trigger, Tigga