Revenue and Camp Bird Mines have resumed mining activities further up Camp Bird Rd. A new sign posted in February 2013 caused some tension as described in:

Please refrain from blocking the road, yield to oncoming mining vehicle traffic, and be careful of rockfall and icefall. Please share the road to minimize future access issues with the road's multiple user groups.

Fall 2012
Well, here we have another long route to add to the recent explosion of new routing on the walls around The Ribbon as well as downstream. Has it been climbed before? Probably, but the public documentation is nonexistent. At any rate, there is now just barely enough gear that maybe it will get climbed often enough that it will not drift back into obscurity.

In 2012, there have been almost a half dozen new routes. This particular route in this local genre of "chossinerring" should/could have more ice than many of the other new routes. It is also unique in that the ascensionists invested in bomber rap anchors. The rock quality in the first three pitches is pretty good (for the area) and gets worse up high, but as a general rule if the climbing is hard, the rock is pretty good as well as the protection.

Pitch 1.
From the horizontal trail at base of wall, follow the gully up 40 feet to the start of the real climbing. There is a wet start and a dry start. If you are lucky and there is ice, you will see a mossy start covered in a bit of ice, M5.

If it's dry, choose the dry start ten feet to the left, in the decomposing yellow cake with the intermittent crack. It takes small cams and perhaps a tied off ice tool, D5. This first step in the first pitch is 30 feet. At its top is a horizontal crack on left wall. You are now deep in the gully and only halfway up pitch one. If you belay here, you can enjoy a nice seated belay to watch your partner climb the (low) crux of the route at M6. Follow the crack on the right hand side of the gully. When the gully narrows a bit, the left wall will have better gear. Look for three bolt anchor up right. This bomber stance might be in the line of fire. On the first ascent of the first pitch, in early December of 2011, the author was at the very steepest part of the pitch, which overhangs a little, when, as reported by belayer Frank Robertson, an avalanche came down and nearly ripped him from the wall. If he had been 15 feet higher at the choke point of the gully....

Frank said the avalanche was 5 feet high as it came through the choke point.

Pitch 2.
Step left off stance and head up steepening gully. If wet, it could have ice and snow top to bottom,WI4 or perhaps detatched and nearly unprotectable as Noah McKelvin found it in January 2012, that might be M5. If really dry, you get a knifeblade, M5 or D5 or 5.9 and loose. 140 feet. The anchor at the top of this pitch is one of our early ones and our favorite, as it's a rock bollard, with two separate strands of 10.5 backed up by one bolt...a nice, old school touch. The bolt keeps the ropes from being buried in the snow. Important for those climbing the route in the dead of winter. Keep an eye out for the handy work of our 4 legged friends as the little buggers line their nests with nylon filament.

Pitch 3.
This pitch has enough bolts to keep you out of the easier gully to the left. Or the even easier variation to the right that Steve House told us Jeff indicated on a photo topo Jeff had chosen.The rock is the best on the whole route, though very compact. You can add to the fixed gear with your own cams and knifeblades. If it's wet, it's still unlikely to have much real ice, but maybe you will get lucky, M4. Dry, it's 5.6, 55 meters. There is a three bolt chain and tree anchor on the right at a stance out of the line of fire. Pitch three has three options. The obvious straight up groove in front of you or the easier gulleys to the left and right. (Edit: We rapped down the whole route in early June of 2014 and the route runs with water and it goes down the center of the three options. Though half of the stream volume drops into the hidden fissures behind pitch three and then emerges again in the gravel on top of pitch two. This might explains why there rarely ever is any ice on pitch three when there is ice on other pitches.) Which of course is where the water that comes all the way from the top of the wall goes. Jeff Lowe told Steve House that he avoided this very steep waterfall variation (directissima) by climbing the right hand variation, which is a broken up ledge and tree filled scramble without any ice.

Pitch 4.
Climb easy, low angle gully, M3 if wet. Dry it's 5.0, 50 meters. There is a three bolt belay/rap here; however, after nearly being struck by rockfall on several occasions, there is another safer anchor at same height just 30 feet left. It's on the edge of the gully. It has one lonely bolt and a nice crack that takes a mid-size cam or two. If it's wet, you might have to dig for this.

Pitch 5.
This is the psycho crux. This has been led by Eric Wellborn and Garrett Riegan with little or no gear. Garrett had a large foot hold disintegrate under him, nearly sending him for a ride. If it's wet, maybe it will be all be frozen together, M4 R. If it's dry, it is 5.8 R, watch out for exploding holds. The anchor is 55 meters up on left wall of gully. It has three bolts and chain.

Pitch 6.
In January of 2012, Eric Wellborn and Noah were stopped here. After banging several knife blades in to the rotten rock to build an anchor, Eric Wellborn climbed 20 feet to the get another pin in at the base of the detached ice dagger covering overhanging, mossy, very rotten rock. After pulling off a chunk of rotten rock, he took a 30 foot whipper. Noah sensible decided to avoid the same possible fate even though the climbing for both of them is well within their capabilities.

When Garrett, Frank, and I equipped the route, we did the route ground up. Garrett lead pitchs 4 through 8 onsight without anything but a bad cam or nut here or there. He soloed all of pitch 6, but that was in the summer in rock shoes after drinking way too much coffee and Red Bull.
If wet, this pitch is WI4-5 M6 R. If dry, it's 5.9 R. The anchor at the top of pitch 6 is in the far left corner out of the line of fire. 55 meters

Pitch 8.
Climb up to trees. Go up one more step of steep rock, though it could be avalanche prone snow. If wet, it is M3 R or steep snow. If dry, it is 5.6 R. There is no fixed gear. Belay and rap from trees.

The approach is the same as for The Ribbon. Follow the base of the buttress into the trees and go about 100 feet. It's the first deep gully one encounters.

The anchors are established; however, this is a long gully system in bad rock. So, whenever possible, belay as if something will come down. A Bird Brain Blvd rack should do: cams, knifeblades, spectre hooks, long slings, short screws if it's winter, and 60 meter double ropes.

The last anchor is whatever tree you want. The rock is so bad that we used stainless steel 3/8" x 3.5".

The route received its name as a corruption of a legal term, wherein an attractive and dangerous situation has been created and (usually) children fall victim to it. We felt that there was some great adventure climbing to be done here but that the rock quality was so bad that the route would languish in obscurity if we did not create bomber anchors and reluctantly added just enough bolts.

We found a knifeblade on the third pitch in that easier gully to the left of the route, on one of our early summer forays up the wall. 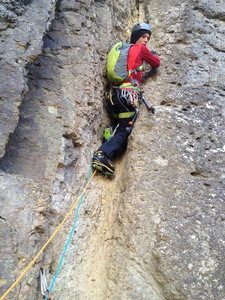 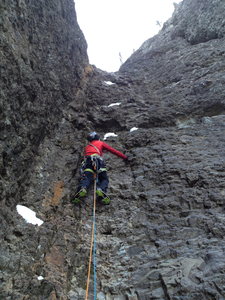 Garrett leading pitch 6. The crux of the upper… 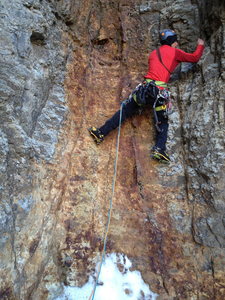 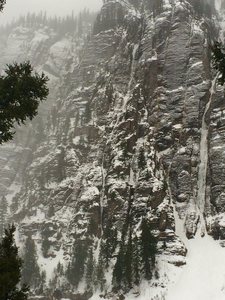 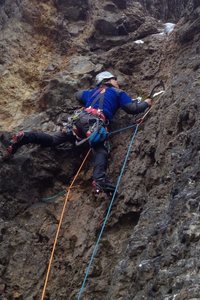 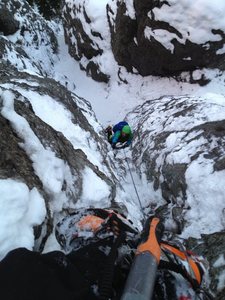 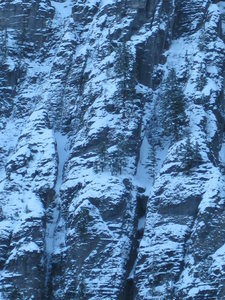 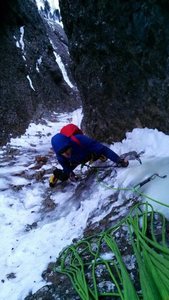 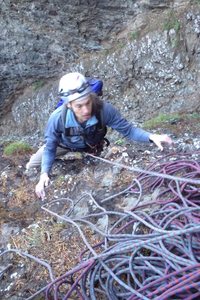 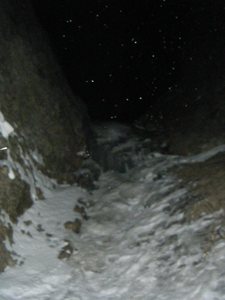 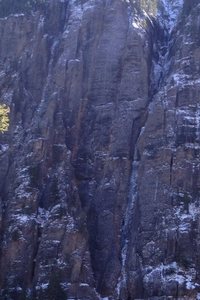 Upper left gully is AH. The gully to the right… 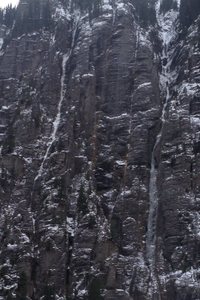