The climb is a short climb. The rock quality is deceptive. A lot of the holds look and feel stable initially, but the rock breaks very easily. I had multiple holds break off right in my hand almost resulting in a fall. There is brush and dirt on many of the holds and right up the middle of the route. It was a good climb, even though it was short. It was challenging mentally but fairly simple physically. If you plan on climbing this route, be very careful. There is a trail at the top that leads back to the road. The route is named Shake 'N' Bake due to the fact that the rock makes you uncomfortable enough to shake, and if you fall you're baked! Don't shake on this route! You may end up baked roadkill! Be careful of loose rocks falling on traffic!!

The route is located directly left of the parking pulloff for Lookout Mountain Crag. It is the first crack on the left, the second crack on the right is the second run, 'Shake 'n' Bake Some More'. It is directly on the road. If you fall, you will fall into traffic.

There is no protection on this wall at all, no anchors, no place to anchor from. It is freesolo only. I wouldn't want to place cams or nuts anyways, it's such sketchy rock. 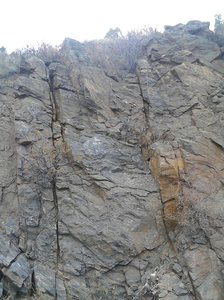 2 climbs. The crack left is first. A third run…

The first crack on the left is Shake 'N' Bake,…