Schobinger's Cracks has always had a special appeal to me since I saw a picture of Will Gadd on the route during his and Mark Twight's first ascent as mixed route. (Disclaimer: I might not have all the historical details straight here.) The caption for the picture just said Eubank's chimney (the last pitch of the route) and so even the process of learning where the picture was taken was one of peering into this mysterious world of alpinism that I had, at the time, only barely begun to experience first hand. At the time, I could hardly comprehend what it would be like to climb hard vertical and overhanging mixed terrain high in the mountains.

Schobinger's Cracks climbs a distinct chimney system from Broadway, up to Upper Kiener's, between the Notch Couloir and The Window. The route itself is short at only three pitches, but the difficulty of the terrain, altitude, and the amount of climbing required to just get to the route and continue to the summit make the overall experience about as big of an objective as one can find on Longs.

Start by gaining Broadway by any means. The most logical routes would be to either climb Lamb's Slide to Broadway, or Alexander's Chimney, or Field's Chimney. Traverse Broadway till you're roughly half way between the start of The Notch Couloir and The Window. A deep chimney system above holds the first and second pitch of Schobinger's Cracks. Some easy climbing above Broadway gets you to the base of the route.

P2: Continue up ice in the back of the chimney then make difficult moves out and around a large chockstone. Above this chockstone, the technical difficulty backs off some, but not much. Finish the pitch by traversing right to the base of 2nd chimney system (Eubank's Chimney). M6, 150 feet. 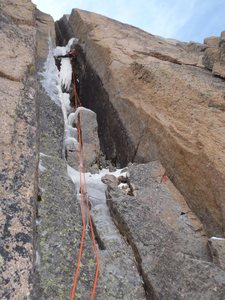 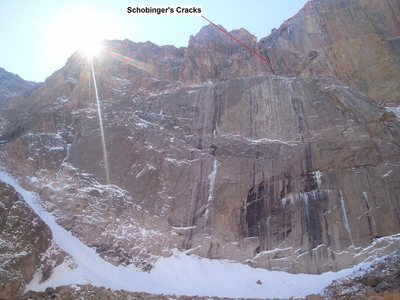 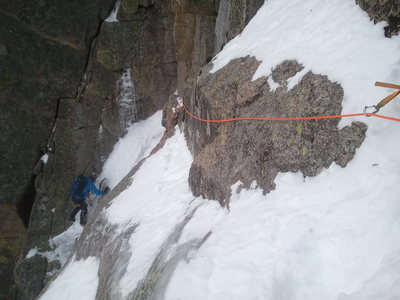 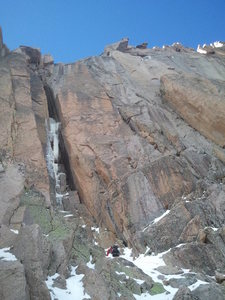