Routes in V-Mountain aka V Rock

I *think* this might be an FA based on the lack of fixed anchors where you would likely place them and the vegetation I had to excavate from the lichen covered dihedral on the finish. However, it is hard to be sure. It's possible we just did a different variation of a previously climbed route. Let me know if I'm wrong, and I'm happy to change the info.

The climb is a fun, cruxy route with good rests in between the hard stuff. We climbed the straight in crack using the obtuse dihedral on the right whenever it made sense (lots of feet, occasional hands) up through the wide stuff (#5 C4 would have been nice to have but isn't necessary). When the crack widens again, look right for a hidden hand crack. It gets a little hollow towards the top, so keep pro a few feet shy of that. Obtain the big belay-sized ledge, and tackle the licheny thin hands/fat finger corner. Be careful - cams REALLY slide on the lichen. I was able to perform the venerable hex huck up over the lip above to get solid pro. After that, climb the rest of the corner which is easier than it looks. Top out on a pillar. There is a bolted anchor on the wall at the top of the corner.

This is one of the first climbable looking lines on the far left (approach) side of the V. 200 feet or so up the wall from where the "contour" approach described on the V Rock main page dumps you out. Look for a crack that starts in the #3 Camalot range and widens with the occasional horizontal break. There is an obtuse dihedral about 3 feet to its right.

The descent is by rappel from the anchor. One 60m rope gets you to the ground with a little to spare. Rap to the right to avoid some loose stuff. Pull your rope as far right as you can get to avoid possible snags. 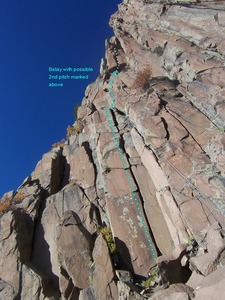 Rapping the route. The route follows the obvio… 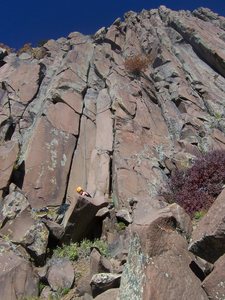 This is what the route looks like after the lea…