Norman Clyde made the first ascent of this route, and was a true BAMF. He made numerous first ascents in the Sierras, including that of Mt Whitney's East Face.

The summit of Bollinger is most easily reached by this route, which starts at New York Pass. It would be the easiest descent for other Bollinger routes originating both in Shadow Lake Cirque and Cirque of the Towers.
The route involves mildly exposed scrambling, on predominantly good quality rock. Exfoliating slabs present interesting route finding challenges, and I won't spoil it for you by providing the details. Inexperienced climbers may not be comfortable on this terrain. (Consider a 30 meter rope.)
This route is not worthy of being your primary climbing objective, but if you are traveling between Cirque of the Towers and Shadow Lake it would be very worthwhile to travel via New York Pass (instead of the easier Texas Pass) and take in this fine summit.
The views of Wolf's Head and Pingora are stunning, and the perspective (from the North) of these famous formations is unique to Bollinger.

From New York Pass, just follow the ridge to the summit. It's a bit trickier than it looks, and the route finding through the exfoliating slabs is what makes it fun. I'll leave it at that. Just reverse the route to descend.

I climbed it in mountain boots, and felt OK. I am a wimp. If you are more wimpy than me, you may want rock shoes. Didn't someone climb the 3rd Flatiron in roller skates? If you are that person, Bollinger awaits your touch.
Bring a camera! 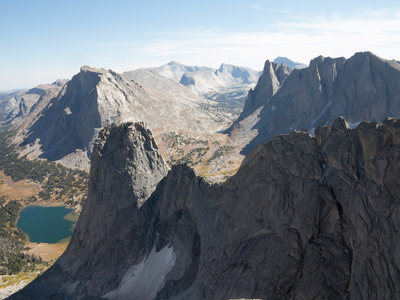 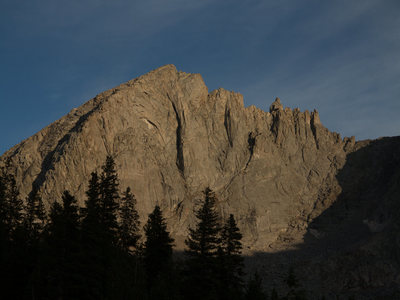