Routes in The Obelisk

This route is characterized by a couple fun, steep, and short-lived crux sections with lots of easy chicken-head climbing in between. This route gets a bit of afternoon shade which is the main reason we chose it. Another advantage is that you don't have to descend nearly as far down the east side of the formation as you would for routes such as the South Face.

The climb starts out of a low-angle gully/ledge system that runs along the right side of the SE Buttress. Climb a section of easy offwidth in a corner and then more easy chicken-head climbing on the face to the right of a large chimney. This leads to a point below an overhanging corner. Stem and handjam (careful of some loose rock) up the corner to a point where the crack tapers shut. Large holds appear just in time and you move around the arete to the left. It is possible to belay somewhere around here. I continued up more chicken-heads to an anchor higher up.

The next pitch continues straight up on increasingly lower angle terrain to a belay below the right side of a steep headwall (left of a large roof).

The third pitch climbs up through this steep section of rock, passing a slightly overhanging bulge on huge holds, good pro, and bullet rock. This could be the best 15ft of climbing on the whole Obelisk and you'll wish it went on forever. After the bulge, easy 5th class leads straight up on ridiculously huge chicken-heads to the top of the formation. You will have to belay short of the top unless you have a 70m rope or choose to simulclimb. 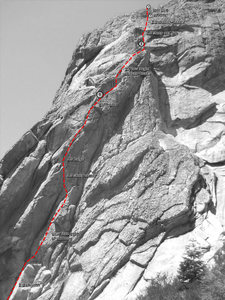