After a short slab and bulge, launch into a relentless overhang, traversing right (crux?) about six bolts up. The first half features relatively straightforward reaches between good underclings and sidepulls, while the second half has far more holds to choose between, making it easy to get off track. Savor any holds you can pull down on, because there aren't many of them!

There is an optional 5.7 second pitch that tops out.

JLC is on the right hand side of the overhanging wall. It has chains on two of its bolts and a rightward traverse about halfway up.

You can easily set a toprope on this route. Hike to the top and rappel off a pair of glue-ins (the correct anchor is just below a large bent cold shut) down to the lip of the overhang, where there are two sets of anchors next to each other. The JLC anchor is the one that's to the right and slightly lower, and it's directly across from a tall fir tree. If you set a TR, make sure to put in lots of directionals, as the route traverses a decent amount in addition to being overhung.

Bolts (about 9), two-bolt anchor at the top. 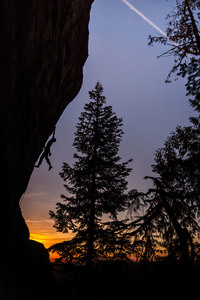 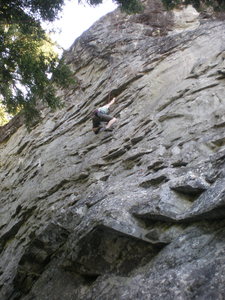 Not the best shot of me, but this photo shows t…