A fun line with two cruxy sections and two decent rests. Good holds, bad holds, crimps, and pockets are all to be had.

Start up through some good, occasionally slopey holds to a bulgy bit where the big, obvious holds suddenly vanish. After a cranker move or two through the bulge briefly easier ground awaits.

Climb through the following almost-roofy bit onto more-or-less vertical rock for a while, until another bulge appears with a dearth of obvious holds. Figure it out and balance your way to the chains while wondering if the pump will catch up to you before you get there.

The line to the left of the obvious black streak (which contains Streak) at the right side of the wall.

The lowest first bolt on the wall makes it obvious.

The name arose because Mike Call put in the top anchors some years back; the route was finally established in 2012 in response to a phone call from Darren Knezek. 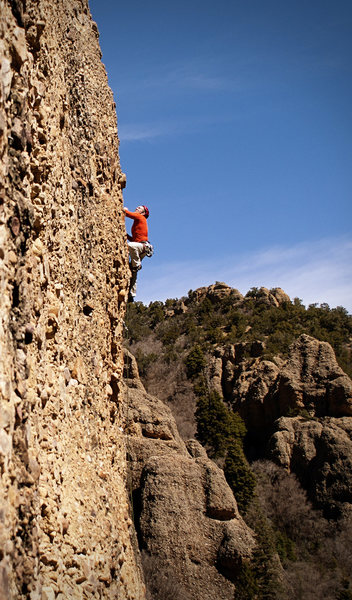