A long, long route by Maple standards, this line will leave you exhausted and feeling like you just ascended three pitches with several cruxes.

Begin by using big, positive holds past the first bolt to a ledge. A tricky, strenuous crux awaits up a vertical section to another "ledgy" bit and a good rest.

The total bolt count on this route is 25 plus anchors, although several of the bolts can be profitably skipped (the route was equipped ground up by Jason Stevens, presumably using a Willy Stick which accounts for the closely-spaced bolts).

You may also want to reach down and unclip some of the bolts once you get a higher bolt clipped because, near the top, you're pulling up a lot of rope and the less drag the better.

Note that the route is longer than half a 60m rope. A new, 70m rope barely reached (there was about 2 feet of rope left on the belayer's side when the climber was on the ground). There is a midpoint chain anchor to accommodate shorter ropes.

When you emerge from the short trail from the road you are directly in front of the black water streak. This line is the first route to the right of the water streak.

25 bolts, chain anchors. Two of the bolts can be easily skipped (bolts two and seven—although don't fall skipping bolt two before clipping bolt three). You may choose to skip others higher up.

There is also a chain anchor midway up the route that can be used to lower off the rope with a single 60m rope. 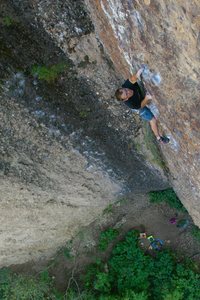 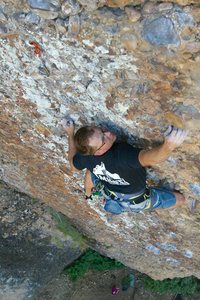 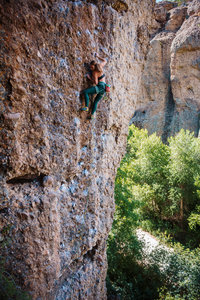 Right below the first set of anchors at the hal… 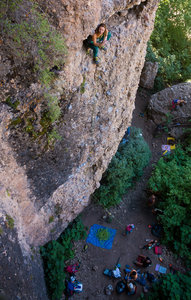 Make sure the milk every rest, you are going to… 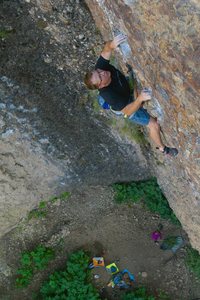 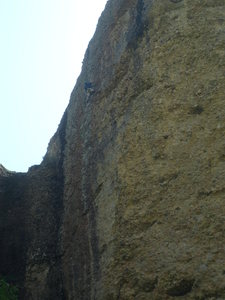 Telephoto shot of The Hitchhiker 5.11c 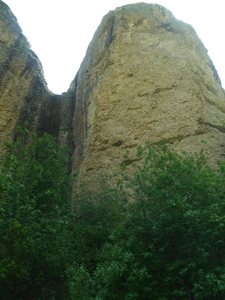 The Hitchhiker 5.11c from the road 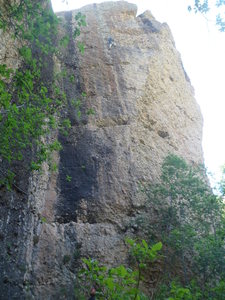 More About The Hitchhiker