A series of grooves and laybacks to the right of Rice Krispies and Spit.

If you wish to climb this by the originators' way, do the following. Climb up to the ledge about 30' up, clipping no bolts, to the groove. Climb in the groove, again, clipping no bolts (~5.9+). At the first opportunity, move left to the nice layback crack (5.9). At the top, clip your first bolt and move right and up to a ledge. This is the crux move (~10a). Then go up the groove above, clipping only the ratty 1/4" bolt on the rib (~5.8+).

Soon after this route was put up, a variation finish "Anarchy and Chaos" was added that goes up the thin crack up and left of the first bolt.

In 2012, about five bolts were added to the bottom groove and the large corner continuation of the bottom groove was cleaned out, creating a nice corner variation. Since this occurred, the route suddenly became much more popular.

In 2019, the two lower aretes to the right of this pitch and the upper arete to the left were bolted, creating several arete-climbing variations (not yet listed). These bolts should not be clipped if doing the original line or corner variation as they would create rope drag and are not needed for protection.

Several possibilities exist for climbing further pitches to the top, including pitch two of this route (now greatly changed due to trundling and cleaning) or A Ship Called Black Rock, and then doing the last pitch of Lookout Point Direct (~5.8+).

On the Lookout Point trail, continue about 40 feet past Baby Tapir, Strange Boar, and Rice Krispies.

Nuts and cams to 2", 7 quickdraws for bolts at the bottom groove and the traverse after the layback. Do not clip any other bolts unless you desire more rope drag.

(Six bolts at the bottom plus one just before the ledge at about 2/3 height. Forget about that ratty 1/4" bolt near the top.)

The ~33 m rap will put you on the ledge where the bolted groove begins, about 30' up. This ledge now has a handline going over to the base of Strange Boar. So, by clipping into the handline, you can walk off.

Similarly, one should be able to TR with a 70 m, but not from the ground--the belayer needs to be on the ledge about 30' up, at the end of the handline. 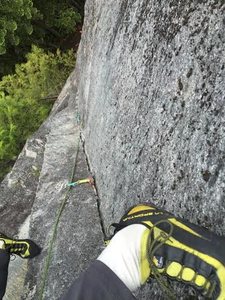 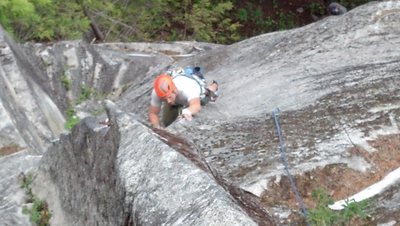 Josh climbing through the crux 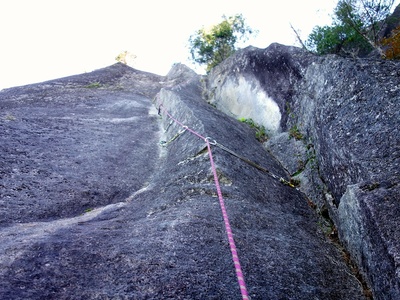 Second half of Pitch 1. You can go up either co… 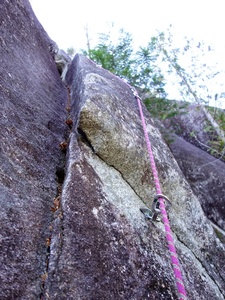 Fun groove in the first half of Pitch 1. Bolted… 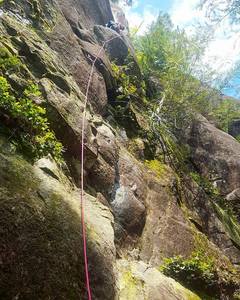 some of the rock was still wet, early season. B… 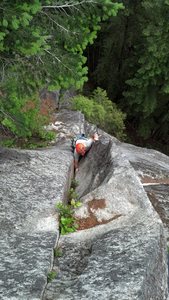 Josh climbing into the flare groove at the top… 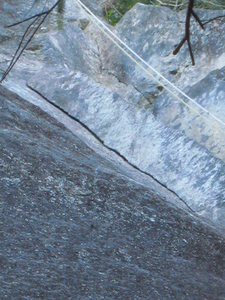 The perfect layback section of Law and Order. (…

More About Law and Order