Routes in Wanna Be Wall

This a bit of a squeezed line, but it does go and protects with gear. While climbing with 3 friends, we sort of got to a bottleneck in terms of climbing efficiency, so this line seemed to ask if it could be climbed or led. The answer was yes to both. Given its cleanliness, it certainly could have been done previously. Yet, it seemed to deserve a better name than Unknown, so it is named...at least temporarily.

Start up in the chimney just to the left of Wannabe Bolter, protect as high as you think the rock is solid on the right. Then find a low blue Alien placement. Commit to the face, find better than you might have expected holds angling slightly left. There was a spot where Jon thought you might fiddle in a #0.5 or 0.75 Camalot in a horizontal. There is a green Alien slot in a small, diagonal crack. Continue up to the anchor for WanneBe Right or Two, then head to the anchors for Wannabe Bolter. Rap.

This is right of WanneBe Right or Two and left of Wannabe Bolter. 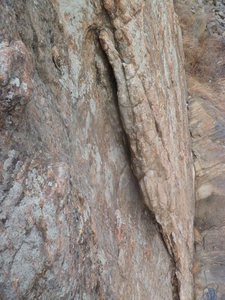 A good view of the crack. 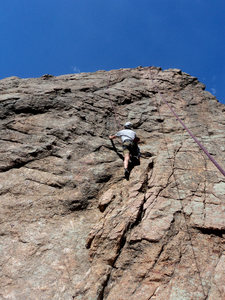 Doug about to move onto the face.