The access for Mendoza Canyon is via the good graces of the owner of the King Anvil Ranch you pass through to get to the canyon.

READ THIS DOCUMENT AND OBEY!
concernedclimbers.com/Mendo…

Matt Walton from the AZ Game and Fish Dept. advised me that extended access to Mendoza Canyon will be allowed to hikers and climbers through a pilot project again this year. The normal closure begins March 1st and runs until September 1st. From March 1st thru April 30th you can contact Matt at 520-400-4022 or at mwalton@azgfd.gov to apply for access. You must have a valid AZ State Land Permit and apply with Matt 10 days to 2 weeks in advance.

You will then be given the combination to the gates on King's Anvil Ranch that lead to Mendoza Canyon. These combinations will be changed every week or 2. Consecutive days of access may be allowed, but overnight camping will not be allowed.

Matt asks that we NOT approach the ranchers about access during this period. All questions should be directed to Matt.


Update from Charles Vernon (12.6.10):
We ran into John King's daughter herding cows yesterday, on the way into the canyon. She was very nice, and we talked to her for a little while. She believes that the missing traps that led to loss of access last year were a result of hikers (climbers? hunters?) whose dogs got caught in the traps, leading to the dog owners taking or destroying the traps to free their dogs.

Regardless of what exactly happened, she made it clear that dogs are not welcome. It sounds as though just heading out there with dogs, without more, could be enough to cause them to rethink access. So please, do not bring dogs to Mendoza!

Access Issue: There is no public access road provided by the BLM to the Coyote Mountains Wilderness Area. Details

There is no public access road provided by the BLM to the Coyote Mountains Wilderness Area. This wilderness is surrounded by state, reservation, and private land. Permission to drive on an access road through the King Anvil Ranch property is granted by the owner during the months of September through February (access closed March through August). This access road also crosses Arizona State Trust Land. The owner of the King Anvil Ranch and the Arizona Game Fish have provided a sign in station for you to register your visit. Please sign in and sign out at the station. Furthermore the Arizona land managers require that you obtain a recreation permit to drive across Arizona State Trust Land. The application for this permit ($15/year) can be found at:
land.state.az.us/programs/n…

This unique route climbs the prominent left-diagonaling corner system on the west side of Elephant Dome, roughly in the vicinity of the west-side rap route. It has only seen a few ascents despite being put up over 20 years ago. Scary, runout, and loose in places, it also has some excellent climbing. In particular, the crux 4th pitch is sustained, well-protected and probably one of the best pitches in the canyon. The first pitch is classic Mendoza exfoliating face climbing with 6 bolts and just a couple gear placements for a full ropelength. It will keep your full attention from the first move off the ground all the way to the belay.

See topo for full description. The topo is mostly accurate, although the first rappel length is incorrect (see below), and on pitch 2 it's better to continue to the large ledge for the belay.

Edit: I am adding a pitch by pitch description from memory six-plus years later (2018) because someone pointed out to me the topo and description that I uploaded is hard to read, and I don't have a higher-res copy. I have it in a word doc but can't seem to get it uploaded in a readable version. Feel free to contact me (or better, Jeff himself) for the word doc. The description below should be adequate to get you up the route, though, as long as you can locate the start.

P1: Difficult moves off the ground lead to six bolts with a couple of gear placements for about 150 feet, trending up and left & staying left of the main corner. Good, sustained climbing but loose in places. Belay at a stance with a bolt from the bolt and hand-sized gear in the corner/roof just above. 5.9+ PG-13, 150'.

P2: Move left and around the corner then continue up the main corner system, then move left onto the face when feasible. The original belay was at a bolt backed up with stoppers but it is better to continue up and left to a large ledge to a natural belay. 5.8, 150'.

P3: Move up and left away from the main corner, then back right after about 100 feet to a belay ledge with two bolts just left of the main corner where the left-lean is less pronounced. This pitch is very easy but has virtually no gear and the hardest moves are probably pulling onto the belay ledge, which has a two-bolt anchor. 5.2 X, 110'.

P4: A great pitch, even though there is some scaly rock (would clean up with traffic). Move up and left from the belay, then back right into the corner on easy, but runnout climbing. Continue up the sustained 5.10 corner past four bolts (one of which is an old two-bolt belay) and ample gear placements to a two-bolt belay with good bolts where the hard climbing ends. 5.10d, 140'.

P5 & P6. There are two options here. Continue up the left-leaning corner system for two more pitches until the corner fades and the angle eases, then traverse right to the saddle and head to the summit of the dome, if desired. Another, more direct option moves out on the face to the right for a 100' pitch of fun 5.7 face climbing ended where the west-side rap begins. From here, a third class gully leads to the saddle and optional trip to the summit.

Descend either down the east gully (described elsewhere--walk/scramble down to 3 low-angle single rope raps) or do the west rappel descent in the vicinity of the route as follows: (1) rappel 100' from the bottom of the gully to the two-bolt anchor at the top of the crux pitch; (2) rappel (two ropes) to an anchor above and left of the large belay ledge atop P2 (NOT to the anchor at the top of P3); (3) rappel (two ropes) to the ground).

The route gets sun starting early afternoon. The hard (and best) climbing is over after the first 4 pitches, so one strategy would be to rap from chains at that point and combine it with something else to maximize sun or shade depending on the temps. Another option if you can figure it out is to rap in and just climb from the crux 4th pitch on up, after finishing another route on Elephant Dome. But the best option is to do the whole route :)

Follow the approach to Table Dome, but just before the dome, break off right following cairns that lead toward the right side of Roof Wall. Just below that, a not very obvious series of cairns leads over to the very steep backside of Elephant Dome. Follow the wall until below the obvious left-diagonaling system (see topo). This is a little ways uphill from a steep line of bolts (the start of "Colin Goes to Colorado, 5.10 A3". The first pitch follows bolts up the face to the left of the large corner system rather than climbing in the actual corner.

Descent is the west-side rap (2 ropes). NOTE ONE SIGNIFICANT ERROR ON THE TOPO: THE FIRST RAP HAS BEEN MOVED AND IS NOW 100' INSTEAD OF 70'.
Note also that if you didn't leave anything at the base, you could leave the second rope at home and do the east-side descent, making for a faster trip back to the car.

We brought a single set of cams from 0 tcu to 4 friend, nuts, rps, and some tri-cams. This was perfect. There are some lead bolts so some draws are nice in addition to the usual arsenal of slings. The bolts are over 20 years old and could use an upgrade, particularly on pitch one, but they seemed to be in decent shape for their age; on the crux pitch good gear is generally available near the bolts. 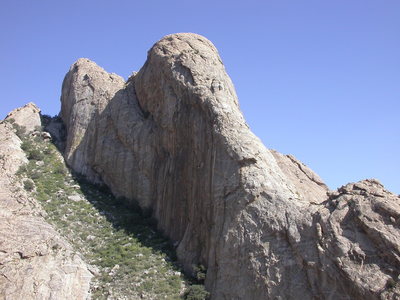 The route follows the prominent left-diagonalin… 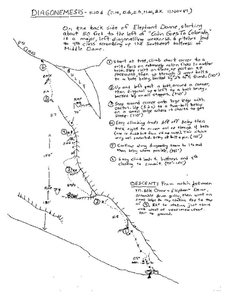