Routes in Cirque of the Moon

The northwest facing wall of the cirque is called Tycho Wall and has 3 distinct buttresses. Pipeline takes a direct route up the middle buttress. Undisputed gem of the area, the climb follows an obvious crack system up impeccable granite for two-thirds of its height, then more broken but still quality rock for the remainder. Pipeline takes its name from the fact that some of the crack system acts as a siphon for water from the upper plateau. This was only a problem on P2 which had to traverse out of this wet sheet, the rest of the route manages to avoid it. Nevertheless a late summer or fall ascent is recommended. Pipeline went originally at 5.9 A3 but was freed the following year (1979) by Mike Head, Tom Wells & Bruce Bundy at 5.11d. The crux occurs on the first pitch with other formerly aided sections freed up at difficulties ranging from 5.9 to 5.11. Note that the FFA team fixed the first three pitches then finished the route the second day, hence the Grade IV rating despite the first ascensionists having bivouaced en route. The following description assumes a mixed free/aid ascent.

Begin climbing a sharp pillar at the toe of the buttress. Crux moves go up and left to a damp belay near a band of knobby rock. Aid up a bit (A2) then traverse left (5.8) across the knobby face to the base of the crack in which the next three pitches lie. Beginning at finger width (A2/5.11) the crack expands gradually to hand-sized. A fixed knife blade marks the end of P2 below a small triangular roof. Pitch 3 continues up on fingers and hands (A2 or 5.9) to a bolt in the middle of some flakes. The first ascent team bivvied here in hammocks then proceeded up the crack as it turns into a flake and then a pillar. From a single bolt belay atop the pillar either lower off and use tension or cross delicate face holds (5.10) to the next crack right. The pitch that follows (P5) eats up mid to large sized nuts as it is a straight-in 5.8 hand jam (that accumulates to an overall 5.9 rating) that grows slabby at the top with a belay at a fixed pin below a steep step (A2/5.9) leading up to a 5.9 corner. This short pitch ends below the infamous Baltz Slot and is marked by a comfortable 'bucket seat' that protrudes from the wall. Take a thin crack left then up and out the Baltz Slot, taking care not to snag the rope in the crack at the top (why it is 'infamous'), then wander up broken ground to a large ledge system (first ascent party bivvied again here). Pitch 8 wanders up and left to the base of a headwall which goes at 5.9/A2. FFA party opted for the chimney to the right which was impassable during first ascent due to great amounts of water. Either pitch ends next to a large roof from where one long traverse leads off the main wall.

Get down by wandering north down slabs and around the corner of the buttress edging the east side of the cirque ('Sunset Buttress').

Full rack of cams with emphasis on middle range. Several fixed pins are in place and at least one marginal bolt. In two places slings provide protection atop pillars. 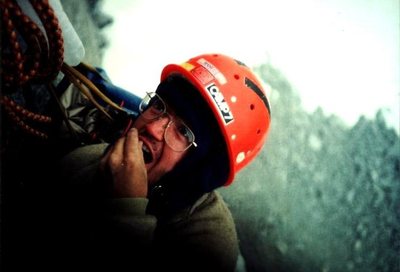 Mark Leonard at the top of the 5th pitch of Pip… 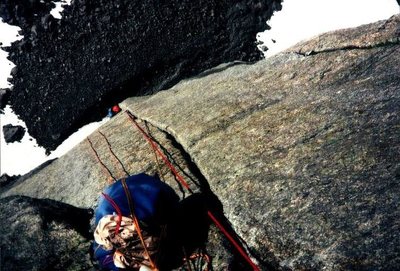 Looking down splitter P5 of Pipeline 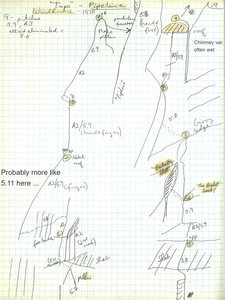 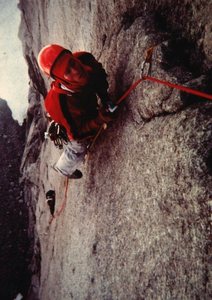 Mark Dalen jumaring to belay at the top of Pitc… 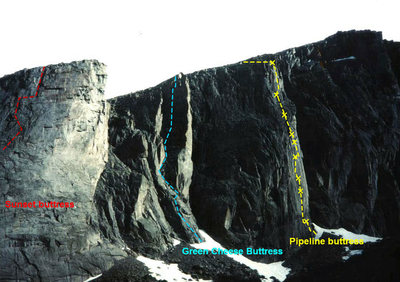 Tycho Wall (Cirque of the Moon) with Pipeline a…