There are better routes at Cheselen, but this one is a good one to have in mind when its raining, as the first four of its five pitches are shielded from the weather by a giant roof.

The route is comparable in style to the Blaue Kaefer, but considerably harder and with slightly inferior rock quality.

The first pitch is a short, traversing pitch of 10 meters to gain a large terrace and the belay. Although very tempting, one is well advised not to skip the belay, as te second pitch also traverses and the athletic crux comes just before the anchor, where rope drag could be a deciding factor. A very worthwhile alternative to the first pitch would be to climb Galileo 2, a one pitch jungle gym (6b) that ascends a giant roof to the left of the route. Galilieo 2 tops out on the same terrace as the first belay for Trockener Regen, and substituting this pitch provides for a much more entertaining start to the climb, in a style and grade more consistent with the subsequent pitches.

Pitch two follows a steep ramp just to the left of a corner, sometimes using the corner. The start is often wet, which is unpleasant but not a show stopper thanks to the very good protection. As previously noted the crux comes at the very end, pulling through a roof onto a small terrace with the second belay - and excellent way to get warmed up for what is to come.

The third pitch traverses left and up on decent but sometimes hard to find holds. The crux is a long sequence (with one intermediary jug) from the third to last bolt all the way up to the belay, on large and not so large sloper holds. We found this sequence to be the crux of the route, considerably harder than any individual moves in the ensuing 6c pitch.

the fourth pitch is a massively overhanging pitch that traverses up and right to the edge of the giant amphitheater. It is comparable to the crux pitch of the Maenner von Memmental, but with slightly larger holds.

The fifth and final pitch consists of face climbing on compact, near-vertical rock laced with horizontal cracks. Note that Viadukt intersects the route from the right.

The route begins just left of the Blaue Kaefer route. The start is labeled at the base in blue paint.

Descent is by abseil - as with other routes in this massively overhanging sector, it is imperative to also clip in to the fixed rope attached to the belays, so you can pull yourself in.

The route is well bolted - no additional gear required. 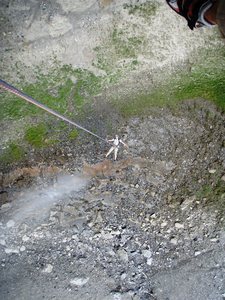 A nice cold bath after a short but intense clim… 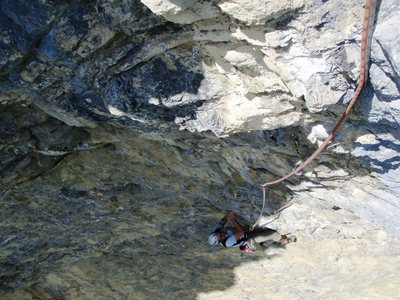 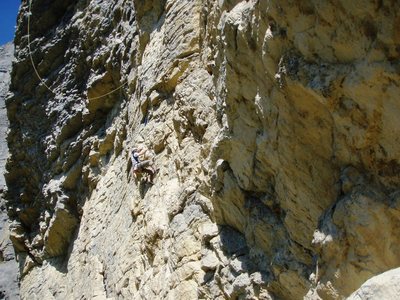 Entering the long crux sequence at the end of p… 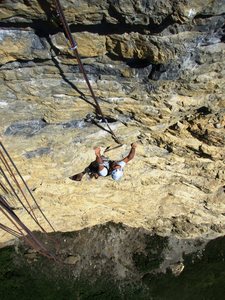 The demanding crux sequence at the end of pitch… 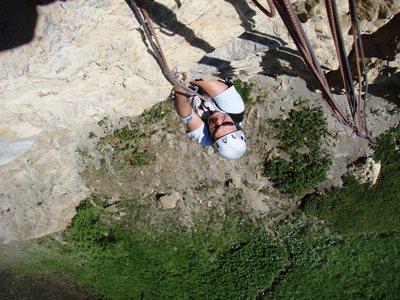 A full-on roof at the end of pitch two, Trocken…