The crux pitch, offering the most brilliant climbing in this route (and perhaps in the entire region), is the second one: a near-vertical 45 meter corner. Note that a different route ascends the face directly above the first belay - for the Niedermann Anderrüthi, you want to move directly left along the belay ledge, around, and into, the corner.

The routes is marked at its base (look for a yellow, red and black bull painted on the rock - depending on snow levels, you may have to scramble up a bit to the ledge where the route marking is). Descent is by abseil: 3x down the upper wall, preferably using the belays of the Fliegender Akku route (a newer route to the right of the Niedermann-Anderrüthi), and 4x down the lower wall using the NA belays.

Anchors were rebolted in 2005 and a few additional bolts were added to each pitch. Nevertheless, bringing an assortment of cams is highly recommended. With very few (mosty bolted) exceptions, there are generous opportunities to place gear throughout the route. 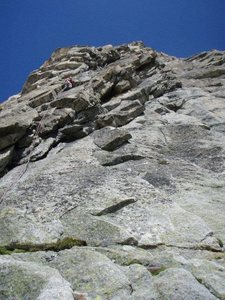 Pitch five of the Niedermann-Anderrüthi, in the… 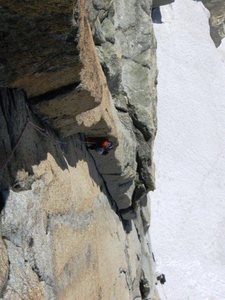 Daniele H on the wicked second pitch of the Nie…

More About Niedermann / Anderruethi 6a+