Viewed from a distance or, close up, the distinctive arête of Albahida just begs to have a classic route on its steep, exposed spine of rock. And...it does!

Bonus for modest climbers or those seeking an escalade plaisir day that the route is within the means of most abilities.

Getting started: locate the base of the ridge. The lower angle ramp leading up to a green bushy stance is the first pitch.

Pitch 1: scramble up the low angle ridge aiming for the enclosed ledge between bushes. Some loose rock. Bolted belay anchor. 5.4 for around 85 feet.

Pitch 2: traverse out from the steep sided belay location, angling up and right. An easier traverse back to the left leads to a nifty belay ledge with a circular hole for stacking the rope into. This belay is just right of a fairly bushy ledge (which could also be used for a belay especially if the climbers wanted to jet out left on the popular Quan es fa fosc variation). 80 feet at 5.7 ending at a bolted chain belay station.

Variation: straight up initially steep climbing leads to a steep slab with good holds and plenty of protection bolts. 5.9 to the same belay spot.

Pitch 3: Up on big, bucket holds, clip a piton, past a slight overhang, into a scoop, then right to a steep rib which is ascended. A short traverse right leads to a lower angle slab, just left of some bushy green trees. Head towards the bottom of an orange patch of rock where a couple of dubious looking rope threads are found for the belay anchor (can be backed up with a hand sized cam). 80 feet at 5.7.

Pitch 4: Traverse slightly right, clip a piton and climb past an orange hole on the left. Around a corner to the right to a slab where the interesting strap bolt can be clipped (for good luck, perhaps?). Up a steep, cracky section which is a bit sustained. Pull into a shallow ledge with a solid, bolted belay anchor. 5.8 and one of the longer pitches so far at around 120 feet.

Pitch 5: Purportedly the crux pitch. Climb up weaving through trees with rope slings to clip. Past the last tree in front of the face, head straight up on thin holds, clip a few pitons and a bolt, then step left on the steep face at a shallow ear flake. Up, then angle left to a sloping ledge with a threaded belay anchor. This pitch can be done short (at the first small, sloping belay stance), or, extended to a number of higher stances, all at threaded rope belay anchors (single or maybe double). 50 feet at 5.7+.

Pitch 6: rally up on big bucket cut out pockets. Fun! Fairly straight up. Not super steep, fun, good climbing on fairly solid rock. Rope threads provide the occasional fixed protection and can be supplemented with additional threads and a few nuts/cams. Belay on threads. 150 feet of 5.6 enjoyment.

Pitch 7: Up up. Pitch can be done a number of ways, heading up then slightly left to the main ridge crest, or, slightly right on a more eastern aspect of the arête. A large belay ledge slightly left at a couple of large trees provides some pleasant shade and a bit of a break. Bolted belay anchor out left, and, a couple of large trees to clip into too. 170 feet of 5.6 to 5.8 climbing (depending in the line taken).

Pitch 8: Up right to lower angle climbing, then, straight up. Clip a bolt then traverse just left to the top of the 5th class climbing. Sign in at the nifty route register. Bolted belay anchor and chain belay anchor (take your pick). 40 feet 5.6/5.7.

From the top of the roped climbing, most parties will un-rope and scramble the 3rd to 4th class ridge to the summit. The climbing is exposed and somewhat loose in places so care should be taken and a rope employed for the less secure (or, if its windy).

Allow a few hours to a full day for this route. A fast, competent party could dispatch this route quite quickly if they stay on route and dont bump into parties above. A slow party, with heavy packs and a bit of route finding trouble, could easily get benighted especially with a late start.

While the route has generally fairly good, compact and well attached rock, there are some loose bits here and there. Be solid and secure. Several serious and fatal accidents have occurred on this route due most likely to the unexpected hold breaking. Take care.

This may well be the most popular multi pitch moderate route on the island. As such, if near a weekend or during popular climbing holiday times, there will be traffic.

Great views and position reward the lucky climber who ascends this route.

The route pretty much follows the striking arête. After the second pitch, the route tends to stay to the right of the ridgeline.

The best descent takes advantage of packing light and not leaving anything at the base of the route. After scrambling to the summit, follow the trail north to the Camino de la Montana road which is followed down to the highway. The road is fairly low angle and seems to go on forever, but, theres numerous shortcuts which help a hiker move a bit more efficiently. Take care not to disturb the residents in the properties near the bottom.

Theres also apparently a descent back from the summit which travels under the west facing wall of Cara Oeste and eventually winds its way back to the start of the ridge. Sounds a bit involved.

Can also rappel the last pitch then down the route La Ley del Deseo but unless one is confident in finding the rappel anchors/belay stations (hopefully from prior knowledge of that route), this method of descent would be discouraged. Also, not doing this descent avoids having to rappel and possibly knock loose rocks onto ascending parties.

Take a few quick draws for fixed gear but shoulder lengths slings are more useful to keep help with the rope drag on the wandering pitches. Maybe 8 slings and 4 draws would suffice. A small selection of medium to large nuts and a few single ½ to 3 cams gives the unconfident some inspiration but theres a fair bit of fixed gear, including fixed pins, the occasional bolt, and a few rope bits threaded through holes.

Usually where the climbing is easy, not much fixed protection, and, at any crux, theres a pin, bolt, or thread to clip into. 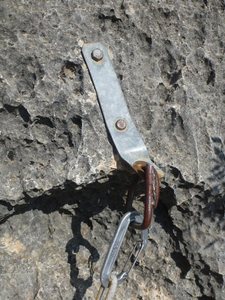 Extraordinary (?) bolt on pitch 4 of Albahida 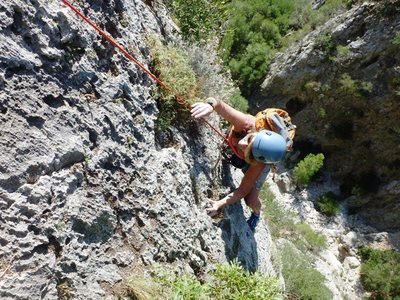 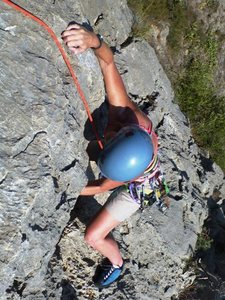 Finish of the 5th class climbing on Albahida 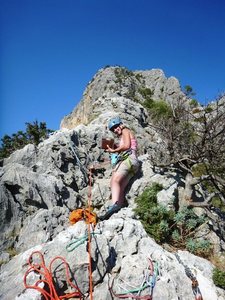 LeAnn signing in the route book at the top of A… 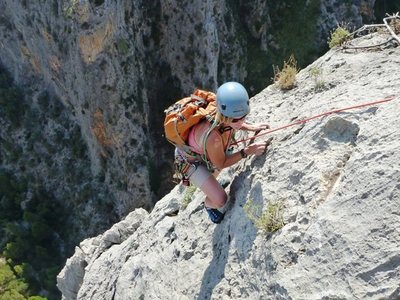 LeAnn topping out the 7th pitch on Albahida 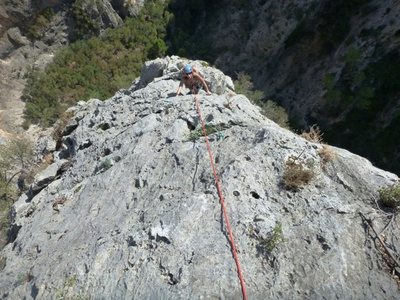 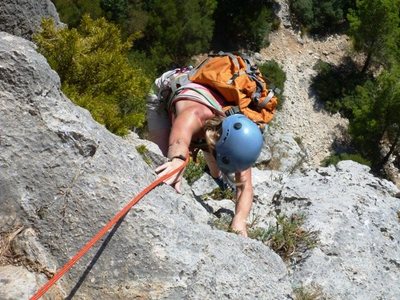 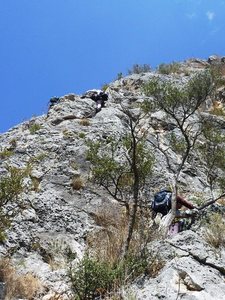 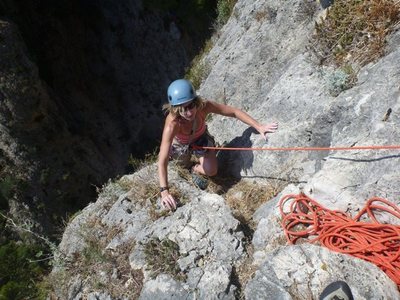 Finish of pitch 4 of Albahida 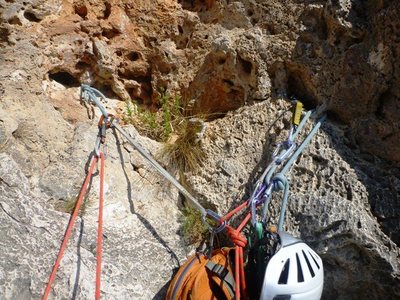 Dubious thread belay at the end of the 3rd pitc… 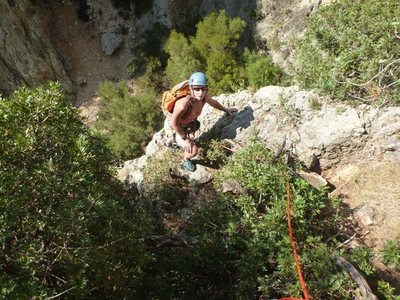 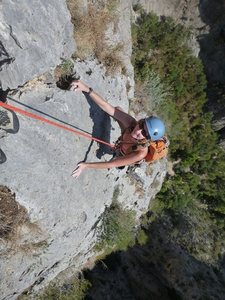