This is one of the best moderate alpine mixed routes in the Sierra Nevada. Winter Route consists of two snow gullies connected by a rock pitch and capped with a rock headwall. In the summer these gullies are full of fragrant wildflowers. There is a mixed chimney pitch at the end of the second gully.

Approach:
Hike up the obvious trail at the end of the road, go right over the creek, and reach the Ashram/Stone House. From the Stone House identify the bottom of the first gully and the field of giant boulders. To get to the route diagonal directly towards the bottom of the gully, keeping to the left of the maze of giant boulders. If you go through the middle of the boulder field you will waste a lot of time fighting bushes.

Route Description:
After reaching the base of the first gully, go up it until the terrain steepens. Either traverse left on a ledge into large right-facing dihedral, which can be climbed in two pitches into the second gully - a rappel may be necessary depending on snow cover - or climb straight up through a short groove directly into the second gully. Sometimes an ice pitch that can be used instead of the groove will form to the right of the first gully; to get to it take a right-hand branch of the first gully from around its midpoint. I've never seen this fabled ice pitch in three trips up the Winter Route, though. I think I heard about it from Alois Smrz.

Proceed up the second gully until it narrows into a chimney. There may or may not be ice there depending on how lucky you are. Take this in one short pitch to the Winter Route Notch then rappel down the other side to a giant ledge. There's no rappel station -just sling a flake on the headwall side. One can bivy comfortably on the ledge.

There are four headwall pitches. There is supposedly a fourth class way up the far left side of the headwall if you're running short on time, but I haven't done it. The headwall finish goes straight up from the large tree then traverses about twenty feet right on a ledge to the base of a groove that diagonals to the right. Climb this for about ten feet then traverse left onto the face. As of winter 2011 there is a fixed knifeblade on this pitch. If it has snowed recently and this pitch can't be climbed in boots or rock shoes, it is delicate dry-tooling over thin gear (knifeblades and microcams). It is 5.7 in summer but the slabby nature of the pitch makes it challenging in crampons. Reach another large ledge, then either continue straight up over 5.5 terrain or go left past a large chockstone to giant ledge number two.

Identify a steep, narrow, loose-looking gully above. It is difficult to access directly; traditionally, a 5.7 pitch is taken on its left, a belay is set about a hundred feet up, then the leader either 5.9 slab climbs or tension traverses into the gully, which is 5.4. After the gully one pitch of 5.0 gains the sandy summit plateau.

Descent:
The descent is not trivial. When you reach the summit plateau - or after you summit - find the east ridge and follow it keeping it to your left until you reach a broad gully. Take it directly down towards Tuttle Creek. About 500 vertical feet before you reach the creek go up and left to a saddle in the left-hand ridge; it helps to identify this saddle from the dirt road on the approach. If you go straight down the gully and miss the saddle in the dark, you will enter the Mirkwood of the Sierra Nevada, complete with spiders and stinging nettle. Once through the saddle go down sand or snow to a dirt road on the north side of the creek. When you are across from your car just cross the creek.

The route is located on the huge south face of Lone Pine Peak in the north Tuttle Creek drainage. To get there, go to Lone Pine, CA, take a left on Whitney Portal Rd, another left on Horseshoe Meadows Rd, and a right on Granite View Dr. Continue up this until just before a ranch house, then take a good dirt road on the right into the Tuttle Creek drainage. There are two parking areas: one always accessible by a low-clearance car, and a higher one sporadically accessible by a low-clearance car. I have seen a truck nearly fall off the upper road into the abyss (it had to be winched out), but I've driven it several times in a Toyota Corolla. The road really isn't that bad, but the late Brutus of Wyde described it poetically, in wilder times, in his wonderful Windhorse trip report on SummitPost:

"High Side!" I roar as the road tilts sickeningly toward the 700-foot-deep canyon bottom. Em scoots across the back bumper of the truck, adding her slight weight to the mass of gear stacked against the uphill side of the camper. The truck crawls across this most dangerous stretch of road, sand trickling down-slope from beneath the outside wheels, rivulets of erosion dribbling through the hourglass of geologic change, the road migrating out from under the truck, one grain of sand at a time, to the bottom of the gorge, thence out into the long alluvial wasteland of Owens Valley and the Alabama Hills. Moments later we pull into the sandy parking at road's end, breathing a sigh of relief at having cheated the forces of entropy once again.

In summer, light alpine rack including a couple of thin pieces for the first headwall pitch and webbing for the rappel from the notch. In winter, also take a couple of ice screws. The descent is a walk-off. 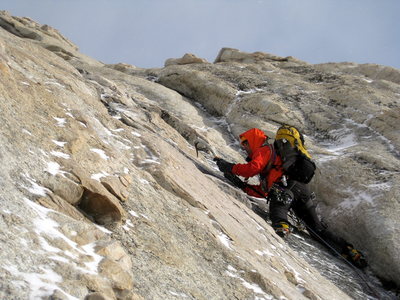 First headwall pitch after a dusting of snow. 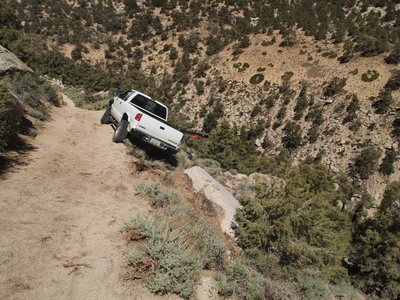 This is unlikely if you drive carefully. 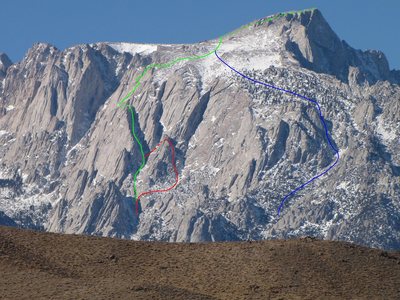 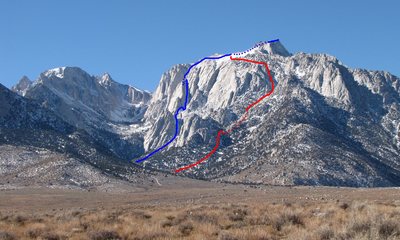 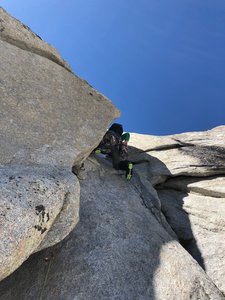 before tree at top of the 1st gully go right up… 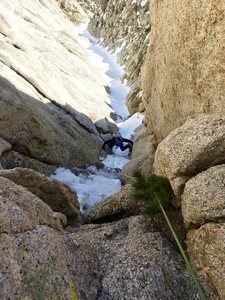 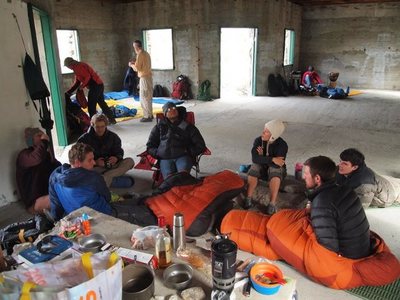 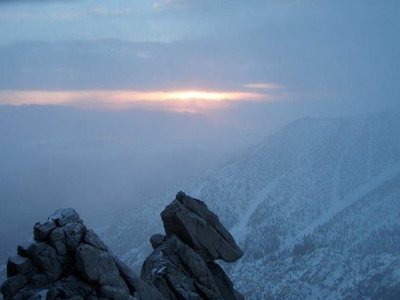 The giant block near the notch, seen from the h… 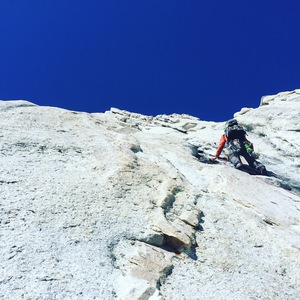 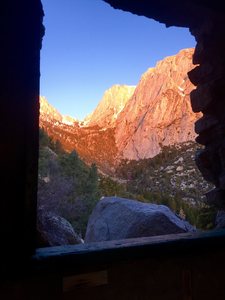 Winter route View of the route from inside th… 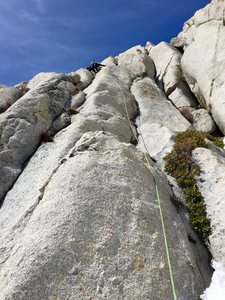 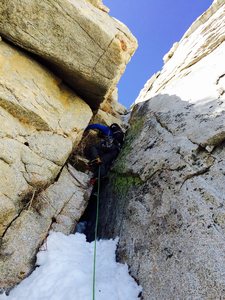