Routes in The Honeycomb Buttress

The Apiary is a climb once thought to be unclimbable by some of the earlier developers of the canyon. I even heard one route developer say they thought about chipping it!

Anchors were probably installed shortly after the golden age of Tieton route development but the line was never bolted due to the difficulty and fear that the route would become a squeeze job.

In 2002 a young and talented Yakima lad named Paul Marquard was on a mission to up the ante in the Tieton. Armed with a Bosch and the desire to bolt anything that looked hard he set out to create a Tieton classic. I don't what to drop the hammer on the hype machine but I truly believe the movement and overall quality of this route are of a high standard.

Paul worked the climb falling at the crux numerous times until one day he won the battle of sloper warfare and cruised to the top where he fell at the last little tricky section. After that Paul moved away and never got back on it. The First Ascent is undocumented so we will never really know who sent it first. There was some speculation RMI guide Casey Grom might have done the FA referring to it as The Reach Around for a move he did at the crux.

Since the FA party is unknown I feel it's fair to give the developer credit for his work and stick to what he named it.

Go big at the start, climb up on fun holds to a strenuous clip and into the crux, after that hold on to the end.

I have seen the crux done 3 different ways. Some will stray right to the arete (which is off route according to Paul) and some will head left. I personally feel the left path flows better but might be slightly harder. How you do it is up to you but once you dispatch the crux sequence hold on through the redpoint crux and take it to the chains.

This route is located between Anaphylactic Shock and Land Down Under. 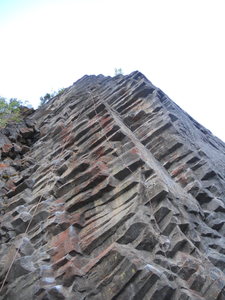 The Apiary climbs the line with the draws on it.

More About The Apiary