This route is an excellent alternative to the Gooseneck Gully route, particularly if the Gooseneck bergschrund's snow bridge has melted out. It may be a bit faster than the Gooseneck route, and obviates the need to ascend chossy rock on the lower Gooseneck ridge. The route is not described in Joe Kelsey's guidebook, but the couloir is easily seen from Bonney Pass.

Although I encountered no problems at all on my ascent, there is clearly potential for major rockfall on this route. An early start, climbing quickly up the couloir, cold temperatures, and overcast days my reduce, but not completely eliminate this issue.

The route requires a long approach from Elkhart Park or Trail Ranch. Most parties will take 2 days each way for the approach, i.e. 5 days round trip. (Gannet has now been climbed in 12 hours car-to car!) From Titcomb Basin the elevation gain for the climb and the return trip is 5800 feet. This includes the 1400 foot re-ascent to Bonney Pass on the return to Titcomb.

The approach hike is long, but beautiful.The climb involves travel over a relatively safe potion of the Dinwoody Glacier. Unlike the Gooseneck route, this one does require that you negotiate an area of densely packed crevasses. Some of them are deep. The couloir is about 45 degrees in steepness, and gains 600-800 feet of altitude, from the Dinwoody Glacier's N.W. arm to the summit ridge of Gannett. An uncontrolled fall down the couloir would probably be fatal, and there is some potential for rockfall danger.

I descended the S.E. Couloir, and retraced my steps through the crevasses. If you (unlike me) are smart enough to bring a rope, you can descend the Gooseneck gully, and rappel over the bergschrund, instead of descending the S.E. Couloir.

The difficulty of this route will depend greatly on snow conditions. In early September, I encountered a surface of corn snow, bonded nicely to an icy/frozen layer underneath, which took my crampons well. Softer, non-icy conditions seem to predominate in earlier season. Surface conditions will vary with the season, and the time of day during which you climb.

I brought two short ice tools, and crampons. A rope would make the glacier travel safer, and would allow for rappels on the descent.
No need for rock gear, unless you wish to belay from the walls of the couloir. This would slow your progress and expose you to more rockfall danger. 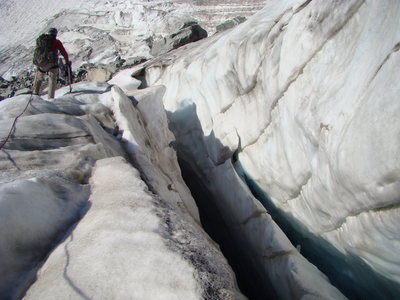 Crevasse as you head toward the southeast coulo… 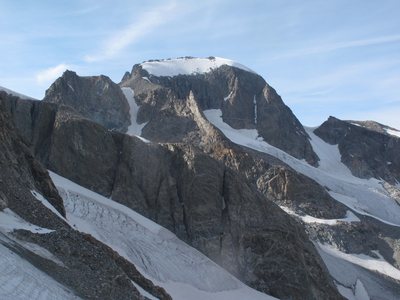 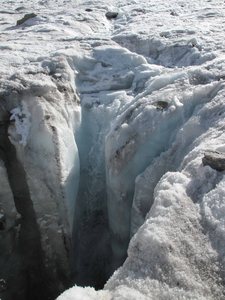 Moulin and Waterfall on the Dinwoody Glacier. 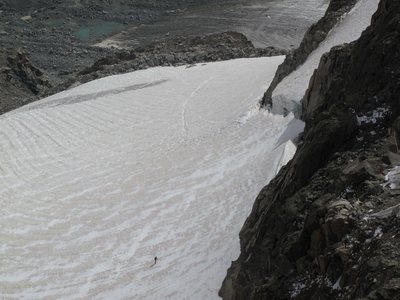 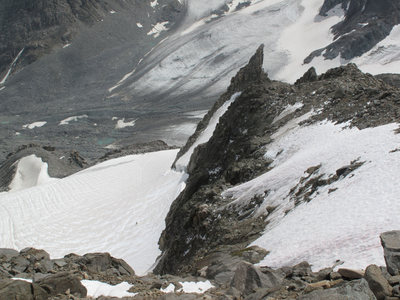 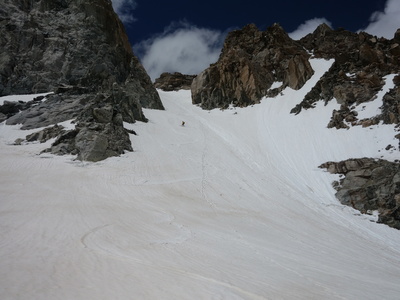 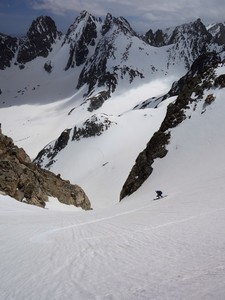 First turns in the couloir. 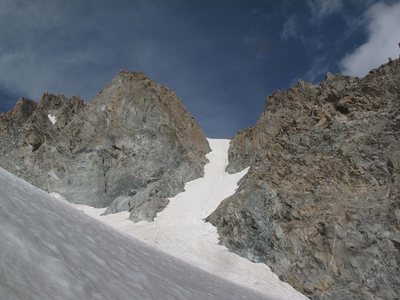 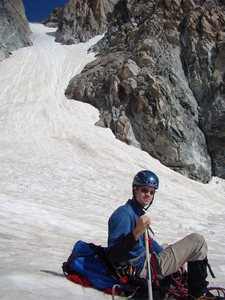 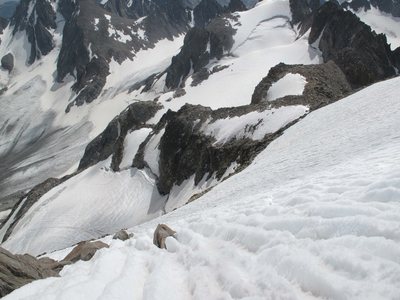 Looking down the SE Couloir on the descent.… 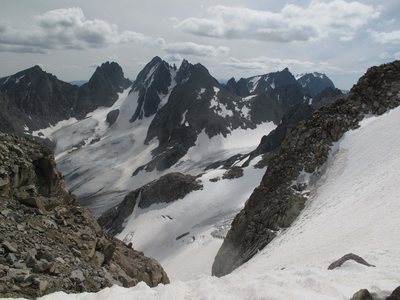 Looking down the gully