I think this is the only route on Mt. Lemmon to have graced the cover of Climbing; in fact, there are two more pictures of it in the feature article, "Hard Rock on the Lemmon" (No. 91, Aug 1985)). It shows Jim on the third pitch, dramatically palming a sloper and grimacing at the next move -- in hideously checkered yellow lycra. Those were the days, uh? (And, no, Ma'adim didn't make the cover just because I was working at the mag at the time; it was the editor's call).

Vying for the hardest multi-pitch climb in Arizona in the early 1980s (Coming to Grips onto the Sound of One Hand Thrashing may have had a more fearsome reputation), RR and I made a number of attempts over several years before putting it together. Part of the reason, besides the sheer intimidation of the Sea Gods' overhanging red walls, was figuring out how to protect the thing -- RR at one point came up with a home-made 4-5" cam (the largest Friend we had was a no.3) to protect the first pitch. The cam was ungainly looking and had a tendency to tip out, so climbing past it took a certain amount of sacking up, particularly knowing that the next piece was a ways up and the pump was coming. I think that part of the climb is protected by fixed gear now, but I bet it's still an exciting lead.

(1) Gain and climb an overhanging groove/crack to its top, then work right along and past two small roofs (the second protected by a bolt) to a sling belay at a pin. This pitch overhangs by about 15 feet in 100' (5.11c/d). (2) Link features past two pins to a face protected by 3 bolts (the bolt protected face is Jim's variation, which EFR says is superior to the original route; the original went left to a loose, right-facing corner, then traversed back right to the line). Above the bolts, climb up and right past two more pins to a ledge system. Parsifal in the Climbing article said of this pitch, "a bizarre series of overhanging face moves, dancing on toetips in a frozen pirouette against a backdrop of granite." Goes with the lycra, I guess. (75'; 5.12a, maybe harder in light of the direct). Someone should combine pitches 1 and 2 to eliminate the sling belay -- making the climb really "free" -- but thoughtful use of runners, or double ropes, will be key. (3) Layback up the left-facing, left-leaning corner above to its top, then hand traverse right past a pin to a three-bolt belay off a small ledge. (60'?; 5.11c). (4) Follow a right-diagonalling crack to near its end in the vicinity of a pin, then work straight right past a bolt to easy ground and the summit. (60'?; 5.11b).

Some of the pins may not be necessary in light of today's gear (i.e., microcams and offsets). If they are crucial, I'm sure RR would agree that if someone wants to replace them with bolts (but with an eye toward retaining the climb's character), please do so -- they've had nearly 30 years of freeze/thaw now. In case you're wondering, "Ma'adim" is the Hebrew name for Mars.

Follow the descent down the scary 3rd-class gully on the north side of Neptune until the huge corner of Jaws is above. Head towards the cliff and catch the 3rd-class ledge that separates the Sea Gods into lower and higher buttresses. While still under the red wall, look for a few pins and a bolt protecting the first pitch, left of the bolt-line for Catch the Wave. EFR's 2000 guide has a picture of the first pitch.

Standard Tucson trad rack; consider tripling up on the smaller cams (to 1). I recall a no.1 tricam being useful on the 4th pitch; with today's gear I doubt it is necessary. 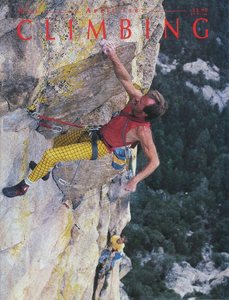 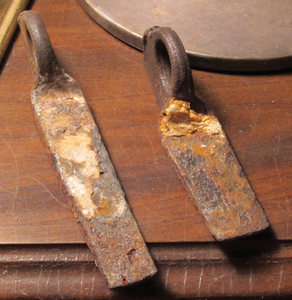 A couple of the old pins that were recently rep… 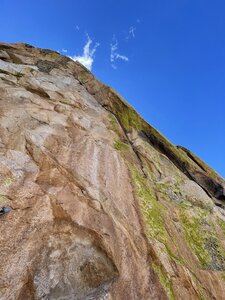 Pitch 3 corner as seen from the belay. Spicy mo… 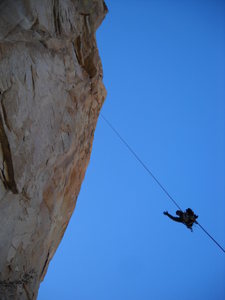 Climber rappelling from the top of pitch 2. No… 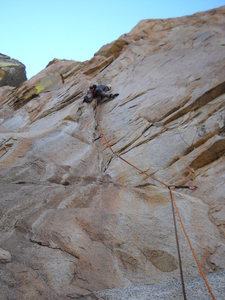 Belayer on duty at the base of Ma'adim on a ver… 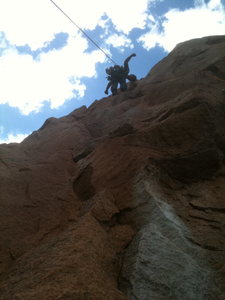 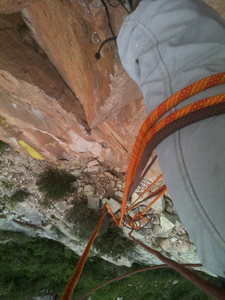