Routes in The Ravens

This area is historically used by nesting falcons, hawks, owls or other raptors. Breeding season varies but is roughly February through July. Nesting raptors are protected by law.

Pressures on wildlife can be immense and are multiplied by effects of climate change and pollutants. Choosing to climb away from nest sites reduces unnecessary stresses to the birds. Give these animals a chance to thrive.

You've looked at the Ravens from Rap Rock and wondered if anyone ever climbs up those ominous chimneys between them. The answer is yes, occasionally, and this one at least is really fun. Plus it goes to a cool summit.

I'll do this climb again, and I was tempted to give it 3 stars. Also, it stays nice and cool even on the hottest days in Tucson.

Pitch one (crux) chimneys up past the overlaps, then angles over left (west) to a group of 3 chockstones for a somewhat enervating belay. There is some ancient webbing here and some manky cams available, but slinging one of the big stones and/or wedging yourself securely is probably the best option. This pitch has very little pro.

Pitch two is easy, and spectacular. Climb up and slightly left (facing Raven C), avoiding a chossy corner and reaching better rock on the outside edge of the chimney (this is about 20-30 ft right of "If you bolt it they will come"). Continue past occasional gear placements until the chimney ends, then hop onto Raven C and climb an easy ramp to a tree belay. This is a long pitch.

From the tree, continue up the groove (one tricky move) to the summit.

(Note: SQL II is a bit ambiguous about the location of P2, but Steiger's guide clarifies that it exits the chimney on the west side of the Ravens. Based on what we did, this seems correct.)

This starts in the middle of the chimney in between Ravens C and D, most easily reached by dropping down the east side of the Ravens. This is the chimney that you walk through to access "If you bolt it they will come" and other sport routes. As you enter the chimney from the east side, the sport routes "El Cuervo" and "El Curvo" are visible directly above on the left and right of the chimney, respectively.

You could start any number of places; we started in the middle of the chimney under some diagonal striations or overlaps (perhaps these are the "lightning streaks"?). The first belay consists of 3 chockstones that are up and left (as you face Raven C) from here.

To descend, rappel west as for Luke Slingwalker. We descended the east side and I do NOT recommend this.

Light rack. The route doesn't have much pro; I placed 5 or 6 pieces total on the chimney pitches and I wasn't skipping any placements. 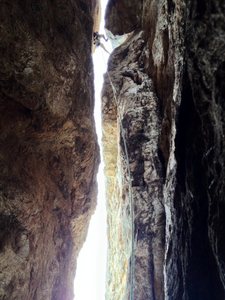 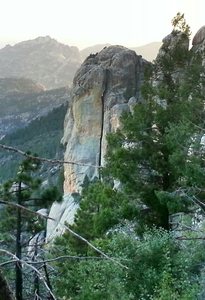 As seen from the approach.