Routes in The Chimney

I believe this is a route described in Hill's Guide that is called North Face Direct. It begins on the ledge right below the second pitch of Rocky Raccoon and Arrowheads and Pitons. Traverse around on the exposed ledge with moderate protection to a two-foot wide chimney crack with little to no protection. However, a large chock stone and the small width of the chimney make it rather secure to climb. Watch out for loose rocks inside the chimney and don't rely on the chocks to hold. Once through the chimney, a small scramble over loose boulders will get you to the lower ledge of the chimney (where the rap station is). To top-out on The Chimney, continue upwards from the rap station to the top.

The route begins halfway up The Chimney and is easily accessible by scrambling left, up and around the base of the formation and traversing up to the ledge where the second pitch of Rocky Raccoon starts.

No FP or bolts on this climb. Anchors must be built.

Descend by rapping off using the rap station on the lower ledge.

BEWARE: rapping off the north side of the climb using the rap station is not recommended due to rope-drag or the potential to get your rope stuck.

Hand-crack sized cams and a set of large nuts.

Pro is sparse and almost unnecessary if the climber is comfortable enough free-soloing 5.4 chimney climbs with loose boulders. The chock stones in the chimney serve as adequate pro once through the chimney. However, it would be recommended to protect the traverse using BD sizes .75-2. To top out, pro is recommended. 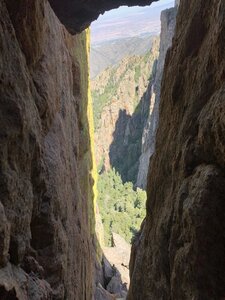 View back from within the Chimney. 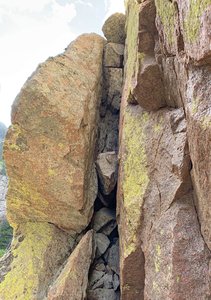