I Think Therefore I Ambush

Ambush Peak's eastern aspects have long been shrouded in obscurity with numerous parties quietly climbing bold lines up the steep East and Northeast faces and rarely reporting their climbs with much detail. The East Face proper is particularly challenging as an alpine objective due to a series of large roofs and discontinuous crack systems on the upper portion of the wall. Most of the lines of the wall are barely there: inobvious, indirect, and often dangerous. I Think There I Ambush will hopefully break this trend.

While still not being an obvious line, ITTIA is a generally clean, mostly well protected, and difficult free line up Ambush's East Face. It features much technical face climbing linking minor crack features. The most difficult sections are very well protected (often by bolts), but expect some fairly serious 5.9 climbing. While it is easy to fall into the trap of idealizing one's own first ascents, I think this route is pretty darn good. It offers an excellent challenge for those wanting a remote, big, and relatively difficult free climb in the Winds.

One has two options to begin. Option 1 (the one we used on the FA): Scramble up the grassy gully that begins the East Chimney/South Face route. At the largest open grassy patch (~300 feet up), cut right up a 4th class ramp to the large ledge system about 1/3 up the East Face. Option 2 (the more "core" option): Climb the first several pitches of Ambush Plaisir.

Assuming one has done Option 1, tie in on the highest grassy ledge that is about the width of a sidewalk. Begin climbing as far right as one can walk (if you have to scramble over exposed blocks, you've gone too far). Climb easy ground trending right from one short crack system to another, aiming for the bolt on pitch 7 of Ambush Plaisir. At this point, you climb that route for 2-3 pitches (depending on how you break them up) to the double-bolt belay below the last pitch. You'll know you're there if you see a single bolt in a slab about 12 feet above.

Begin the last pitch of Ambush Plaisir by surmounting the pillar and clipping the bolt. From here, ITTIA continues right along the major flake system with some spicy 5.8 on hollow flakes to a double-bolt belay near a large left-facing corner. For organization, I'll call this pitch 1 of ITTIA (even though you've already done 2-3 pitches of climbing on Ambush Plaisir).

P2 (5.11-, 20m): Climb directly right over hollow flakes, crossing the main left facing corner to the base of a shallow left facing corner with a finger crack. Climb up this corner ~20 feet, then climb right around a conspicuous dark block, passing 2 bolts on the slab, to a natural belay at the first stance below a flake.

P3 (5.12-, 35m): Layback up to and around some large detached blocks (be careful!). Climb through the double roofs and face above, clipping 3 bolts. Above the 3rd bolt, undercling right to a double, thin right-facing corner. Ascend this to a roof, which you undercling right. Belay at a semi-hanging stance just above and right of the roof.

P4 (5.11-, 35m): Climb up a shallow left-facing corner with a large plate. Climb right around a rounded arete to a thin crack/flake arching right. The first 30 feet of this pitch are runout 5.9. Climb the arching crack with cryptic moves and solid but challenging to place gear. Layback around a small loose flake and belay at a semi-hanging stance at a flake. There is a large, right leaning corner/roof feature up to your right at this belay.

P5 (5.10+, 55m): From the belay, reach long to the left to a crack. Ascend the crack to where it ends (~10 feet). Do a committing face sequence left to a crack through the roof. Continue up the right facing corner. Where the corner splits, move left to a frustrating and insecure flare. Some 5.8/9 R lurks here as well. Follow the flare to an easy layback on a flake and a hero jug traverse left to belay in a comfortable nook between a large chockstone and a small roof.

P6 (5.9, 55m): Climb right around the roof and move right along the obvious right leaning crack/ramp past a bolt to a stance. Do a short pull onto the second part of the ramp. Climb this to its end, and ascend a flake straight up then left to a right-facing corner. Climb this corner as it thins, then step left to belay in a sloping alcove.

P7 (5.9, 60m): Climb out the alcove (around a large chockstone). After 40 feet, traverse right on 4th class ledges then up easy but loose and dirty rock. Belay where you can.

P8 (5.9, 60m): In reality, there are lots of options for this part of the climb. Several excellent-looking cracks climb to the summit ridge. We climbed more easy, loose, dirty ground around right to a right-facing corner with twin cracks. While probably the easiest of the options, it will probably be wet in spots and a bit lichen-covered. Climb as far as you can and belay where the wall turns into large blocks over which you can easily scramble.

P9-10 (4th to low 5th class): Scramble up and right along the summit ridge, crossing the top of a large gully splitting the East and Northeast faces, to the summit.

Descent: Scramble down the west face then traverse south to the couloir between Ambush and Mt. Geike. Descend this (steep snow or talus) back to the base of the East Face. This gully is truly heinous. If it has snow in it, you'll be front pointing; if it's dry, you'll be scraping down tons of loose rock.

The wall is in the sun until early afternoon. The first half the wall is slabby and can get quite warm in the morning. The upper half, which is very steep, gets shade earlier. The wind can also be a factor - even calm weather at the base can blast you off your balance higher on the wall. The other issue with the wall is that the weather generally comes in from the west, which is entirely invisible while climbing.

The route itself is big. For our final push (after a fews days of establishing the pitches through the roofs), we took 22 hours camp-to-camp. Obviously, future ascents will require far less time, but plan on a very long day, even from a camp close to the base. The descent is not obvious; scout it first or don't attempt it in the dark.

I Think Therefore I Ambush climbs a relatively direct line just right of the center of the East Face of Ambush Peak. Technically, it begins at the belay below the final pitch of Ambush Plaisir and climbs slightly right through the major roof system and tops out about 300 feet to the south of the summit.

RPs, medium to large stoppers, double set of cams from purple Metolius/blue Alien to #3 Camalot. Triples in .5 and .75 Camalots might be useful, especially if you will want more pro on 5.9 through 10- climbing. 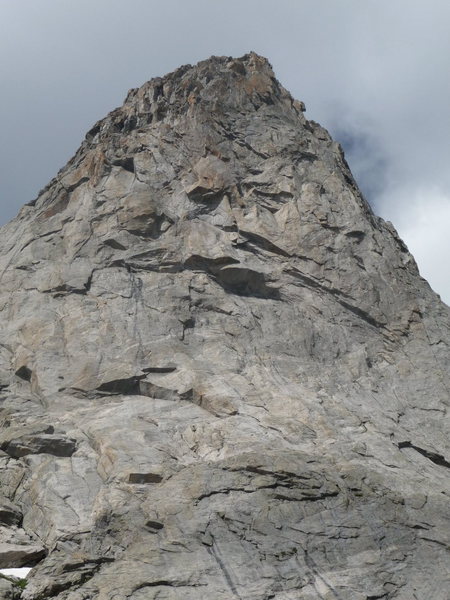 [Hide Photo] The formidable headwall of the east Face. ITTIA climbs slightly right (about 50-70 feet) of the very large roof at the base of the headwall 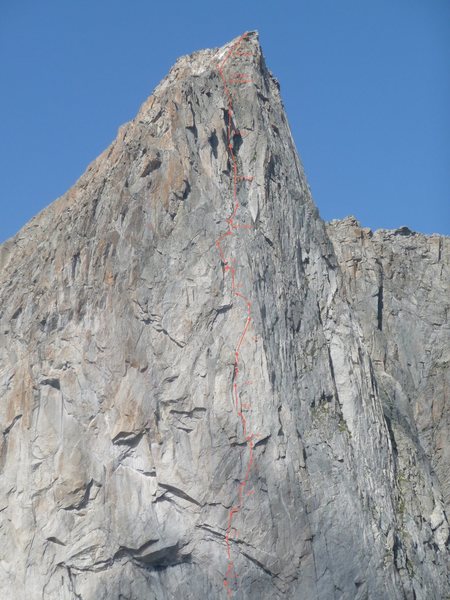 [Hide Photo] Detail topo of ITTIA pitches from about where it diverges from Ambush Plaisir. Note that circles indicate belays while arrows are placed generally over or right of the line of ascent. 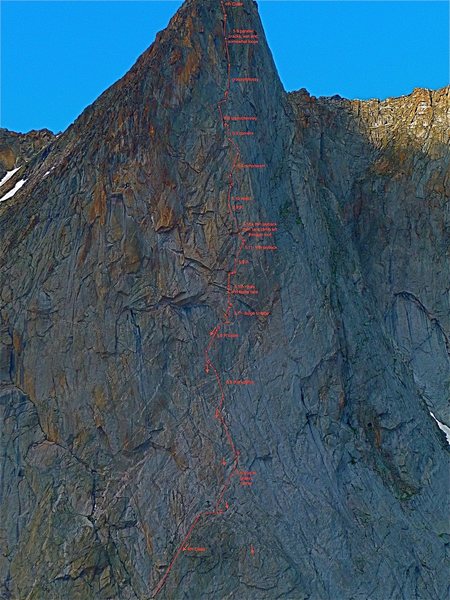 [Hide Photo] Detail topo of ITTIA pitches from the large ledge at the start to near the summit including pitches on Ambush Plaisir. Note that circles indicate belays while arrows are placed generally over or le… 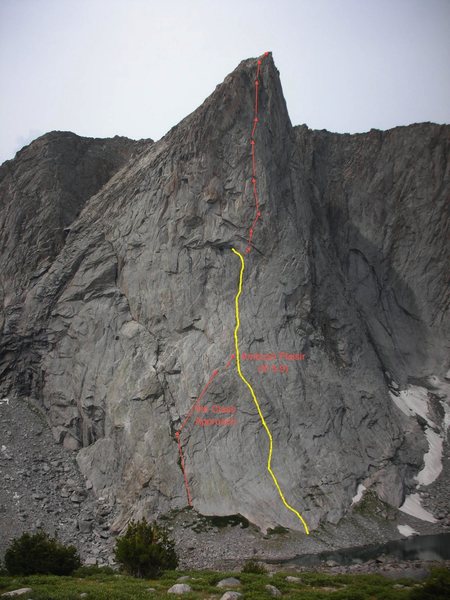 [Hide Photo] This photo shows ITTIA in relation to Ambush Plaisir, including the 4th class approach. From where ITTIA diverges from Ambush Plaisir, each arrow is approximately one pitch, although several of the…