The Prince Route is a combination of two of the standard routes up Fuji san: the Fujinomiya route, and the Gotemba route. One begins at the Fujinomiyaguchi gogome trailhead (Fujinomiya Trail 5th station), but then turns east at the 6th station and takes the trail to and through the Hoei Crater. From the crest of the crater, one joins the Gotemba route for the rest of the climb. See the map of the route below. This is probably the second longest route up the mountain after the Gotemba route. It offers outstanding views of the southern alps, Izu peninsula, several cities, and the Pacific.

The Fujinomiya route is the shortest and steepest route on the mountain, as it follows a relatively direct line to the summit. The Gotemba route is fairly direct, but since it starts lower on the mountain by hundreds of meters, it is longer and much less used than any other route on the mountain. The Prince Route enjoys the higher starting point (2,400 m), but adds some distance and scenery to temper the steep climb. It wraps around the mountain a fair amount, so that if you are still on the trail at sunrise, you have a good chance of seeing it. It takes you through the Hoei Crater and within a 5-10 minute walk of the top of Mt. Hoei. If the moon is in the right cycle, you can watch it rise above Tokyo from here.

Even though this is a popular mountain, it is still a fair-sized hill. It was below 0°C on the mountain and 33°C in town (late July). Come prepared.

There are a number of methods one can use to ascend the mountain, the most common of which are to hike through the night, or stay at one of the huts located at some of the stations along the way. The number of people that the huts claim they can accommodate seem to be similar to the number of hamsters you might see in a pile at a pet store. If you don't mind paying a few thousand yen for an intimate setting with folks you haven't met before, then you might be right at home. We opted for the hike-through-the-night method, with a couple of naps.
Huts list

Hop the Shinkansen bullet train from Tokyo, Shinagawa, or Shin Yokohama, and step off at Mishima or Shin Fuji. Buses head up from there: Bus info (to Fujinomiya Trail 5th station)
If you are staying in Mishima, there is a Toyoko Inn right next to Mishima station. It's on the north side of the station, which is where the Shinkansen will deliver you. The bus to Fuji-san is found on the south side of the station, along with the local trains. You'll need to walk a few blocks to get there, since the local and Shinkansen stations are on different sides of the tracks and are not connected. The Fujikyu bus ticket office is in a small separate building outside the station. Extra time in Mishima is recommended, as this part of town has the local flavor of smaller cities. Go for a stroll through the park just south of the station and continue following the clear spring waters of Fuji through town. There is an elevated "path" that follows the creek . . . well, it's actually IN the creek (see below).

Come prepared with patience if you do not know some Japanese, as English speakers seem to become more rare the farther from Tokyo or large cities you go. The culture is very forgiving for the most part, and everyone learns to read and write a bit of English in grade school, so writing things down is very helpful.

Bring adequate cold weather gear. Don't let the lowlands fool you, it's cold up there on the summit waiting for the sun to rise.

Oh - don't forget to bring a few hundred yen in coins...for use of the facilities on the hill. 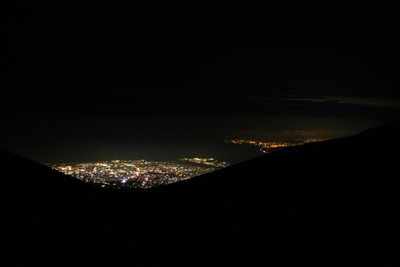 Fujinomiya, as viewed from inside the Hoei crater. 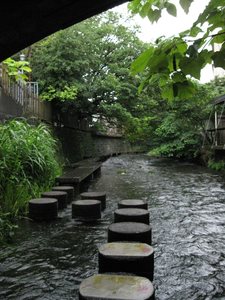 The "path" in Mishima. 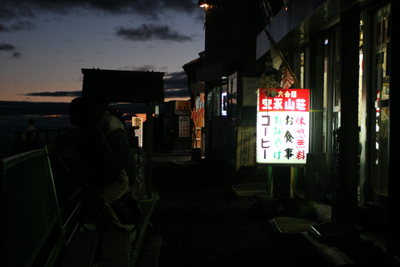 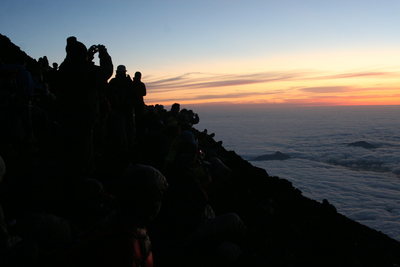 Some company on the summit. 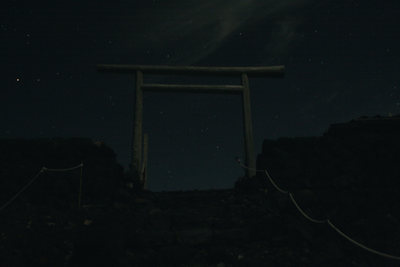 The Torii gate at the top of the route, by moon… 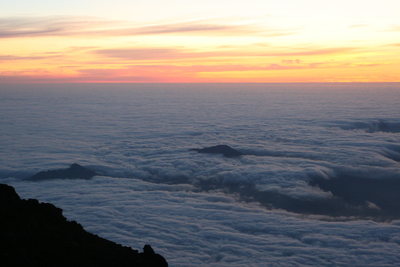 Dawn breaks over Japan, as viewed from the summ… 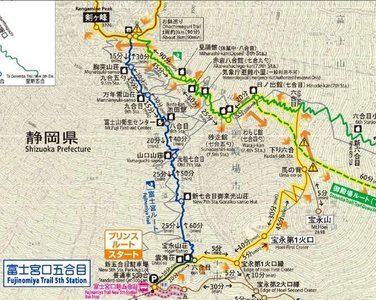 The map of the Prince Route. 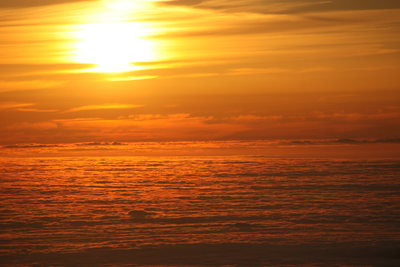 Sunrise from the summit of Mt. Fuji. 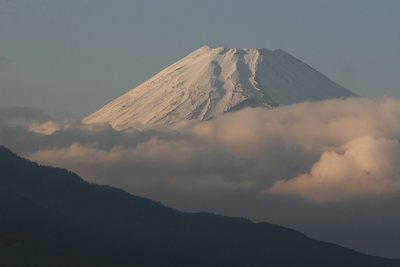 Fuji-san, as viewed from Mishima to the southwe…