Follow the trail from the pull-out toward the main wall; the free-standing formation at the left side of the White House wall is Pennsylvania Ave Pennsylvania Ave.. Trend around left of this to spot the start of the route (ie, the slightly left-to-right leaning hand crack).

Coming from Garfield area, one can stay close to the main wall and scramble up behind Penn Ave, then down a nice terraced slope. If you hit the big alcove, go back 20 feet to the right.

The newest classic line in Emancipation. I would say it's up there with Garfield and Political Prowess. With a nice medium of mixed gear it never gets too spooky, making it a great climb for ...anyone really. Running right between Utter Butter and Political Prowess up a continuous slab this route may hold the longest pitch at Rushmore. And it says it in the name....bring your best smearing shoes.

Pitch 1: 5.8 125' Shares the same first pitch with Political, up the dihedral to a ledge then lieback a short right facing corner. But instead of building an anchor in the horizontal, continue to cut up left toward a bolted anchor in the major dihedral. A single 60m rope will not reach the ground from this anchor.

Pitch 2: 5.10+ 160' Are you ready for this mega pitch? There are 11 bolts plus all the gear you'd like in between. So, 20 draws is recommended. Use as many long runners as you can, especially in the first half. When leaving the anchor, start to the left then traverse right (avoid starting on the death blocks to your right). Follow the vertical seams linked by bolts with a slight 'S' curve in the middle. The rope drag doesn't actually get that bad, but if lugging 100lbs of gear isn't your idea of fun then there is an optional natural belay located just above the bush half way up the slab. Continue past the puzzling crux to the amazing (bolted) belay at the base of the steep headwall, where you can watch your partner climb the entire pitch.

Pitch 3: 5.10- 40' From the awesome belay at the top of the second pitch, start just right of the anchors in the finger crack that leads into the chimney. Some good gear will take you to two bolts in the short chimney section just below the top. 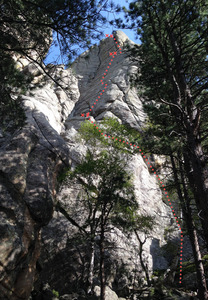 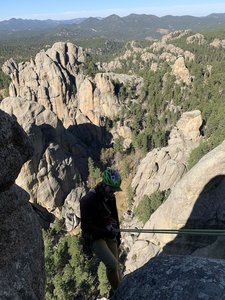 Rappelling off the top of Smear Campaign 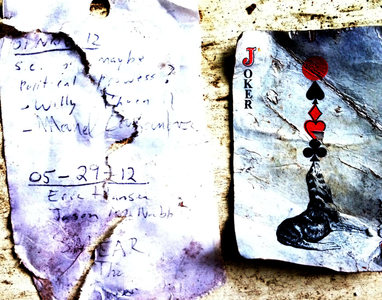 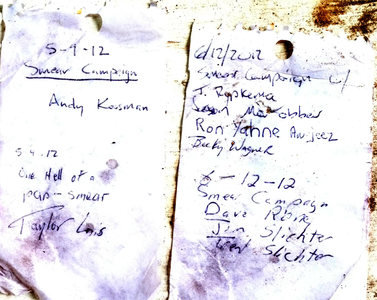 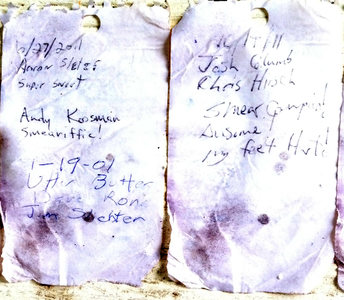 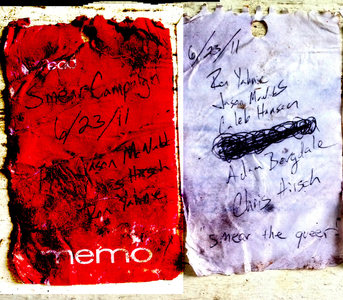