Don't be fooled by the diminutive name, this route is a full meal without the chips and salsa.
Steep and pumpy climbing on good holds leads to the ledge then slightly left to the NORTHeast face for steeper pumpier climbing on bigger holds.

Let it be noted that Dave Merin led this climb on gear the day I top roped it to see if it was worth bolting. He put long slings on the last piece where you could bail to the ledge left, then went out on the face where I climbed on top rope and did the moves. A fall here would have been nasty. He then climbed the crack that forms the arete of the upper head wall. I bolted the line farther left on the steepest part of the head wall. The crack he led yielded scant and marginal gear in marginal rock. He said he didn't think any of it would have held a fall. In fact had he fallen up high he would not be around to read this description.

I chose to bolt a fun and safe route up a tower with several fun and safe routes. Rather than let Dave's very bold lead be the end of it. Dave did say he thought that it would be fine. Of course I did have a fully charged Bosche will a new bit up against his temple when he agreed. 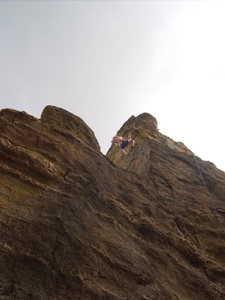 Goes from steep to a over hung arete! 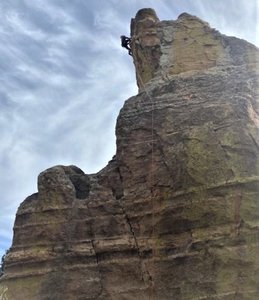 lower crux is a little tricky a typical no chal… 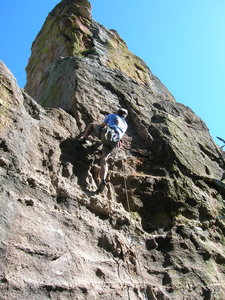 Steve on the steep start of chihuahua chimichanga.