This historic route was used by Harry and Betty Davis for the first ascent of the North Rabbit Ear. It is more technical, steeper, and cleaner than Boyer's Chute, without the slog through loose dirt. A nice beginner route to the summit of the NRE, it protects well and provides great views.

Pitch 1, 160 ft, offers the steepest sections of rock. The primary difficulties are surmounting awkward blocks. You may want to split this pitch to reduce rope drag, as the top-out is more technical than the rest. There are two rap stations on this pitch, one about half way up, the other (less obvious) all the way at the top where steep rock gives way to a scramble over a bouldery shoulder with some mountain mahogany. Scramble around until you are on a more westerly facing rock and see an obvious tree-filled gully leading up to the what appears to be the summit.

Pitch 2, 140 ft. This gully offers several challenges of its own, and numerous variations. There are some clean slabs and cracks on either side which could make for a much harder route. On some of these cracks, old pitons will be found.

An alternative to the "brush filled gully" after "the shoulder" is to head to the left of the gully (after the initial moves, which are best done on the right side). After couple of large steep steps, there is a tree on the left with a bit of a head-wall above it. The head-wall is easily surmounted on the left. Belay from here and then go up the ridge line past another large tree, up the slab beyond it, and on to the false summit nearby, then scramble to the real summit farther north.

For a rappel down, walk south from the summit. There are cairns marking the descent route. At this point the location of descend looks extremely unlikely, as the boulders seem to lead to a sheer drop, but you get to a small shoulder below with a ramp leading to the right from it. Follow the ramp, easy 3rd class, to a bolt+piton rap anchors. Rap about 100 feet over an overhang to a broad shelf. The second rappel, protected by two bolts, requires two ropes and reaches the saddle between North and Middle Rabbit Ears only a short distance above the start of Davis Route.
The gully tops out on a sharp knife-edge ridge which meanders east to the summit proper.

The start of this climb is by a sizable oak tree few hundred feet below and west of the NRE-MRE saddle. From certain vantage points one can see webbing/rope belay anchors above. Do not be confused by a much harder crack system further down the gully. If it looks harder than 5.4 it's probably not the Davis Route.

Light racks, but with a good selection of runners and extenders to avoid rope drag. Due to the meandering nature of the upper gully, rope drag may be an issue anyways. 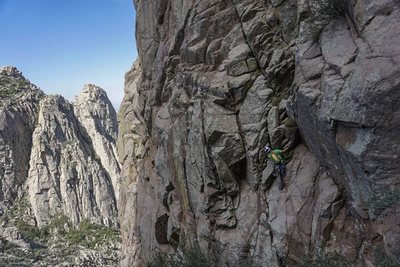 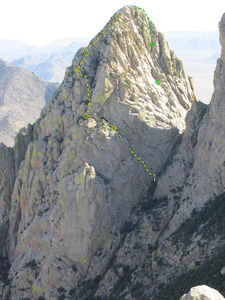 View from the summit of Rabbit Ears Massif. Cli… 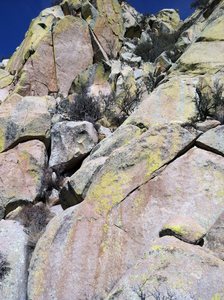 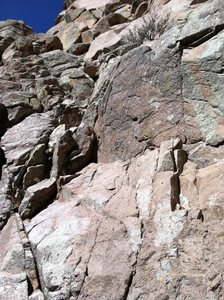 More About The Davis Route