Aptly named, as everyone involved was "on the clock" during the Ice Fest when it was put up. This route has a little bit of everything. Steep ice down low, committing trad climbing in the middle, and steep bolt protected M climbing on top. The first pitch is M7 35m. Start out on ice, which forms a comfortable ledge where it ends. Then climb rock that becomes slightly overhanging as you approach the anchor. Fight the urge to move right onto a small ledge. Instead move left on steep ground to the large(er) ledge with a two bolt anchor. Two bolts protect this upper section.

The second pitch, M8 20m, leads out from the anchor through a series of steep, blocky roofs. Six bolts protect the steep section. The angle eases back after you come over the lip of the roof. Late season the finish may be dirty, wet, 5.8 trad climbing to the top, but earlier in the season it may be possible to climb good ice in the crack to the top. It is possible to forgo the nastiness to the top by rapping from two bolts at the lip.

Either double ropes, or a single with a tag line. You will need two 60m ropes to rap from either anchor. The first pitch requires 4-5 medium screws, medium runners, cams to #4 Camalot or equivalent, set of nuts, and two Quickdraws for the top. The second pitch requires 6 quick draws plus anchor. If you decide to lead the last 10m to the top you will need #2-#4 Camalots, pins, and possibly short screws earlier in the season.

Rappel from a tat anchor around a tree at the top, or from two bolts at the lip. 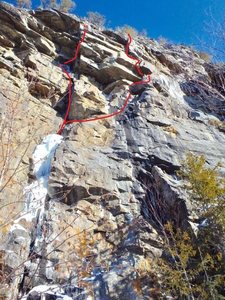 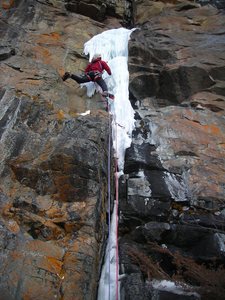 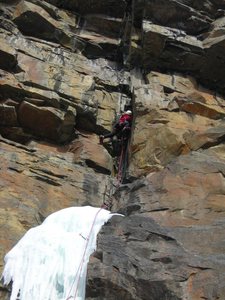 Dave Rone entering the M7 minutes in his tense… 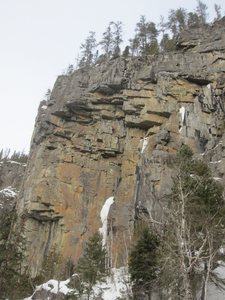 Dave Rone and Burt Lindquist on the 2nd pitch o…