Though this route is near Sella Pass, it is quiet and rarely crowded. The route ascends an hourglass (Chalice) shaped south facing wall to the left of the Rizzi Chimney. It is a full days effort with some great rock mixed in with some fairly loose rock with the crux tossed in at the very end of the climb. The approach is long and the descent is a bit tricky and long as well, making for a full day outing.

Pitch description:
Pitch 1  40 m II: Climb up some easy ledges to a stance near the niche
Pitch 2  35 m III: Exit the niche by climbing right then up a wall until beneath an overhang.
Pitch 3  35 m III: Move right and follow a crack to a good stance below a dihedral
Pitch 4  40 m VI: Climb the dihedral until you can traverse out left to the arete and then a large ledge.
Pitch 5  45 m VI-: Climb the steep crack up and slightly right to a small stance.
Pitch 6  40 m V-: Move up the ramp right, then up to a higher ramp and further right to a stance near the chimney.
Pitch 7  40 m V-: Climb up to a small ledge then traverse left and climb a shallow, loose and moss covered corner to a good stance.
Pitch 8  30 m III: Climb to a higher ledge then left around the edge. Finally climb right to a stance.
Pitch 9  20 m VI: Move left and ascend a yellow/black dihedral then a steep lieback crack to a short corner and good stance beneath a roof.
Pitch 10  20 m VI: Climb the roof on the left, then move over a black bulge.
Pitch 11  35 m VI-: Climb a vertical right slanting crack then traverse right around the ridge to a stance in the niche.
Pitch 12  45 m IV+: Climb a short corner then follow a narrow ledge left and ascend a chimney to a belay below a yellow chimney.
Pitch 13  30 m VI+: Move right to climb a steep, yellow, fractured crack with many pitons in situ. At the top of the crack, move left to the chimney. Climb the chimney to a ledge.
Pitch 14  25 m IV+: Continue up the chimney to the col or climb the arete to the left to the col.
Pitch 15  250 m 3rd class: Climb up then left to gully to summit.

Location: Start below a large yellow niche at the foot of a crack system to the left of the Rizzi Chimney

Approach  Park at Sella Pass and hike up to the Sellajochhaus Rifugio then along the Valentini road toward Forcella di Rodella. Follow a path to the right up an eroded ridge to the South East Arete of the Grohmannspitze(Punta Grohmann)and then below this face until you are underneath the hourglass shaped face of the Torre Innerkofler (which is left of the huge chimney). (1.5 hours)

Descent  Climb up to the summit. Descend to the south west on a ridge towards Il Dente, then slightly left through chimney/groove section to a small col (can rappel this bit 20 m). Descend another short gully and continue down keeping generally to the right and crossing several ribs/short walls and ledges and gully systems to the rappelling station. Near the end you will pass to the right of a tooth ridge with a hole through it) and finally over a short wall to the rappel. Be certain that you are on the proper rappel as there is some confusing off-route tat set up like rappels in the slot system that is to the (skier/descender) left. You should be directly above the highest point of the gully into which you are rappelling and you should be able to see the fixed rappels below. The rappel is good quality and you can look straight down to the talus at the top of the notch. Make two 20 meter rappels and work your way down to the top of the notch. Descend to the left back in the direction of the climb until you reach another rappelling station above a mud and ice filled couloir. Rappel down this about 45 meters then descend loose scree for a long ways back around to the base of the mountain. Follow your approach path back to the Sellajochhaus for a well deserved beer (2.5+ hours).

Protection: Standard Dolomite rack with some extra medium to large camming units- bring 1 set of camming units ½ inch to 4.0 inches with a few extra in the 3-4 inch range, one set of wired stoppers, a selection of threads, many long slings and free carabiners to reduce rope drag. 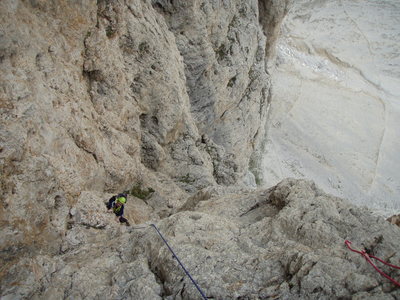 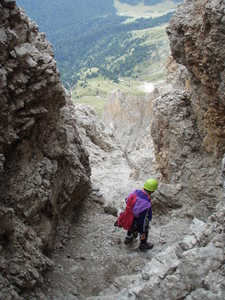 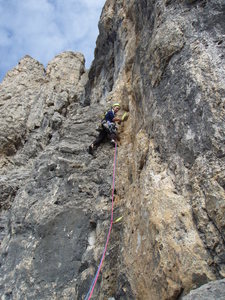 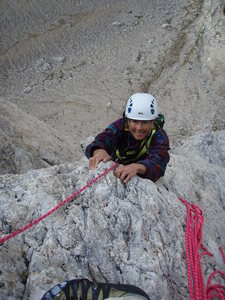 Topping out on pitch 7 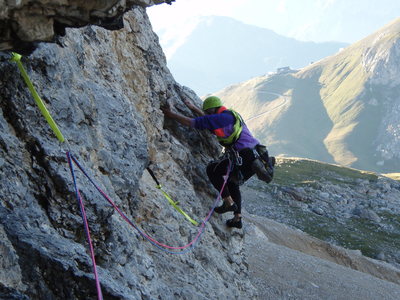 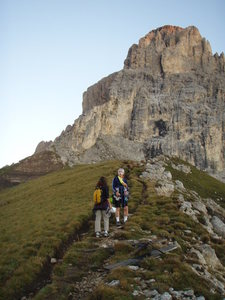 After hiking along the road for a distance, tak… 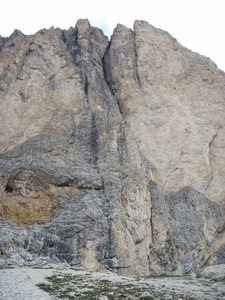